Who doesn’t like talking about a draft? Excited about the upcoming high school season, Five Tool’s Dustin McComas and Drew Bishop decided to complete the first-ever Five Tool Texas High School Player Draft. The two overly competitive members of our scouting team completed the draft live during the most recent Five Tool Podcast. Most importantly, you can cast your vote below and get a direct link to the podcast by following the Twitter link:

❗️We want to know: Which team is best? – Teams quote tweeted to this. ❗️

Cast your vote NOW in the poll below!

Don’t have time to listen to the podcast? No worries. We have you covered with Drew and Dustin providing some written commentary about their draft picks. Enjoy.

.@LSUbaseball commit Blake Mitchell (@mitchellblake25) of @TwelveRecruits was named the Most Valuable Catcher at the #PudgeWC. Who’s it going to be in 2022?

Request your invite for the 2022 Pudge World Classic » info@fivetool.org pic.twitter.com/IzoauZLmoq

#TeamBish manager: “Really excited with my foundation in the first five picks. Went with the no-brainer first pick in Sinton’s Blake Mitchell. Elite catcher and bat with the ability to come in and close if necessary. Next, I went with the obvious ace and perennial winner who happens to pitch for two elite high school and select programs. I backed up my ace choice with another potential ace in the 2023 class, TCU signee Mason Bixby. Bixby is one of the few guys that people wouldn’t look at you like you had lost your mind if you slotted him in the No. 1 spot in 2023. From there, I went with 2023 SS/RHP TJ Pompey. Elite at everything he does, with Dustin taking Jett Williams, I had to lock down one of the most important spots on the field with a stud and the mission was accomplished. In round five, I went with the burner. Kendall George will wreak havoc on the SEC much like Enrique Bradfield did for Vanderbilt last season.”

#TeamDustin manager: “I knew Drew was going to select Sinton catcher/right-handed pitcher Blake Mitchell and I went into the draft knowing I’d select the player left among Mitchell and Round Rock two-way elite prospect, Travis Sykora. Here’s what y’all didn’t know as Drew made that pick live: he had been working behind the scenes to create a fake injury rumor about Sykora with the hope I would get scared and not select the flame-throwing, homer-mashing 2023 stud. Who does that?! Questionable character leading #TeamBish. Anyway, Sykora is going to touch 100 MPH off the mound this season and gives me a big athlete to play around the infield anywhere with a power bat; I see him providing some position/hitting ability before closing out games.

Undeterred and unfazed after Drew took my favorite 2022 pitcher, I selected 2022’s top-rated player and the best hitter in the state. Jett Williams will set the tone for my club with his professional approach and slow heartbeat in the batter’s box. At Area Code when guys were striking out left and right, Williams stepped up against premium stuff and hit a rocket down the left field line to get the Rangers going. Drew elected to load up on arms so I happily took Tomball Memorial outfielder Jeric Curtis, who rocketed up our rankings list to No. 3 in the state. With true 80-grade speed and a dynamic offensive game, Curtis is going to terrorize opposing pitching at the top of the lineup.

I wanted to grab an arm in the fourth round and I had a sneaking suspicion Drew wouldn’t dip back into that position pool for a while. So, I snagged Celina QB1, right-handed ace and Oklahoma commit Noah Bentley. I’ve already seen Bentley toss a no-hitter with 15 strikeouts and he’s a big-time performer with strong mental makeup. I know he’d be able to provide length for my pitching staff. Snagging Ridge Point’s Justin Vossos in the fifth round gave me another plus-plus runner who is a strong defender at second base and has a dynamic offensive game. This puts Drew in a bind because if he tries to use Mitchell out of the bullpen, my team will run wild on the bases.”

@VictusScoutTeam 2022’s Kasen Wells (@kasenwells11) barrels up this ball and picks up his THIRD extra base hit of the game with a double to LCF. Big time bat in this one. #DudeAlert

#TeamBish manager: “In the middle rounds, I went for versatility. But first, I solidified a DOMINANT outfield with Texas signee Max Belyeu and Texas A&M signee Kasen Wells. Between those two and previously picked Kendall George, any balls #teamdustin can’t get over the fence will be caught. Belyeu and Wells will be mainstays at the top of the order for me. Seo can be used in a variety of ways but I had to have him. Everything he does is loud and hard and I want that on my team. Sanders was originally slotted to play the hot corner, but versatility allowed me to grab another elite player late and move him to second. One of the best hitters in the class, Sanders will be in the middle of the field and the middle of the lineup. Sharp is another versatile weapon that I can use in a number of ways. His athleticism on the mound and at the plate will allow me to matchup with anyone Dustin rolls out.”

Absolutely Missile! 🚀 @TigersPolk’s Jayson Jones (@jay_joness13) leads off the game with a solo home run that left in a hurry. Left the bat with a 97 MPH exit velocity. #FiveToolPower

#TeamDustin manager: “After Drew delivered a couple of tough blows with two outfielders, this is where my team really begins to separate itself. Allowing me to take both Jayson Jones and Chase Shores back-to-back was a big mistake. Jones gives #TeamDustin’s lineup the most raw power possible in the middle and Shores could push to become the top pitcher and player in the state. After talking up how much of a fan he is of Thomas, Drew allowed me to pick him, giving my lineup arguably the best pure hitter from the left side in the state and a ton of leadership and intangibles. Lester and Martin are both athletic, very talented catchers with the ability to drive the ball out of the yard.”

.@TESTBaseball 2022 RHP Cole Phillips (@Cole_Phillips_) is bringing the 🔥 working a clean 1st inning on the mound.

#TeamBish manager: “The fact that some of these guys were still on the board is comical and will just add to the reasons #teambish will dominate. Cole Phillips, to me, is the best RHP in Texas in the 2022 class. LaViolette is a jumbo athlete that has light tower power and can run. Jalin Flores will start at third and slide over to short when Pompey hops on the bump. Another Sinton Pirate, HBU commit Jaquae Stewart is a big-time bat that will challenge for the title of best hitter in Texas in 2023. McGarrh represents another elite talent that will help at short and out of the pen. The Tech commit has a huge future in front of him.”

💣GET UP AND OUT OF HERE.

#TeamDustin manager: “I had Cole Phillips teed up to pick and Drew sniped me. Blind squirrels find some occasional nuts. So, I returned the favor by drafting Brayden Randle. Drew is Mr. Rockwall and didn’t take his guy. What a shame. I get the definition of a gamer and performer who is going to be one of my team’s main leaders and can play all over the diamond. Murray, Cox and Queck add to the elite athleticism and speed in the outfield. Good luck getting a fly ball to drop in between my outfield. Cox and Murray are stud football players and Queck ran a 4.2 down the line. Oh, all three can drive the ball out of the yard. As for Binderup, I am convinced he’s poised for the type of monstrous season that pushes him into that top tier of pitchers in 2022.

Mac Rose (@mac_rose_) lines a 2-run single to center making it 12-6 as we now head to the top of the 7th with Rockwall on top.@Rockbaseball (TX) 2023 #uncommitted pic.twitter.com/b1mLFH3Jdu

#TeamBish manager: “Some really good players late for #teambish as I cap off the clear winner in this bet. Trenton Shaw oozes talent and I knew I had to get his tools on my roster. Uncommitted 2023 OF Dylan Schlaegel is poised for a monster year. His intangibles and tools will combine for a breakout season this spring. To fill my second catcher spot, I went with the hometown kid, Mac Rose. Mac will have a chance to catch, pitch, and hit for me. With makeup off the charts along with his versatility, Rose was a no-brainer. Staying in Rockwall, I opted to go with power RHP Trevor Tranberg. He is a guy that will shoot up lists this spring as he looks to pitch the Hawks back to Round Rock.

My next pick I went with lefty Aidan Lamar. I will stand on the table for this guy and not be surprised to see him lead what I think will be a LOADED Rock Hill team this spring. This guy can put any pitch wherever he wants it in any count and will continue to rack up strikeouts at a high rate. Last and definitely not least, I talked Dustin into adding one more spot on our roster because I couldn’t finish this thing out with Jayden on my team. From an intangible standpoint, Jayden is off the charts. His makeup will continue to help his stock soar as he continues to fill out. Don’t be surprised to see this guy playing short in the big leagues in the future.”

#TeamDustin manager: “Drew, who again cheated because he knows Rose’s S2 Cognition score, tried to make up with his Rockwall fan base by selecting Rose, but I think some of the best fans in the state will see right through his ways. I love the way I finished this draft. It’s not just about acquiring talent – it’s about acquiring fit and balance. I needed a left-handed presence, so I added one of the best in the state (Abeldt); I needed some more thump in the lineup, so I added some of the biggest raw power in the state (Sanders); I wanted some strikeout stuff to bolster my pitching staff, so I added Area Code’s Most Outstanding Pitcher (Dollar) and a guy who is going to throw in the mid-90s this season (Davenport).

With Acosta and Bates, I’m betting on talent and upside. The former hit bombs all summer with a wood bat, is probably still underrated on our list and touched 92 MPH off the mound. The latter is an elite athlete who can run and has an intriguing bat from the left side. Plus, he might be the most physical player in the state.” 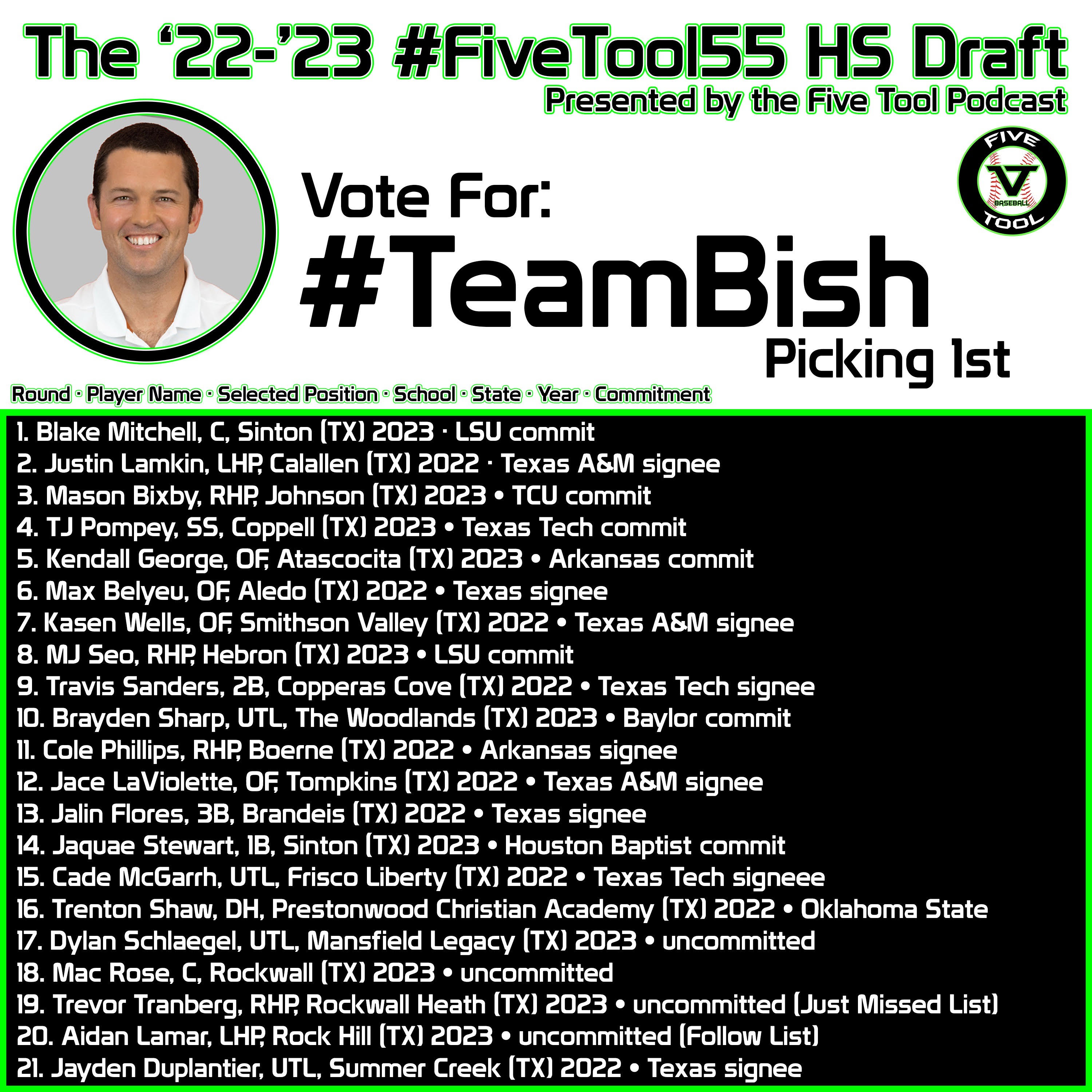 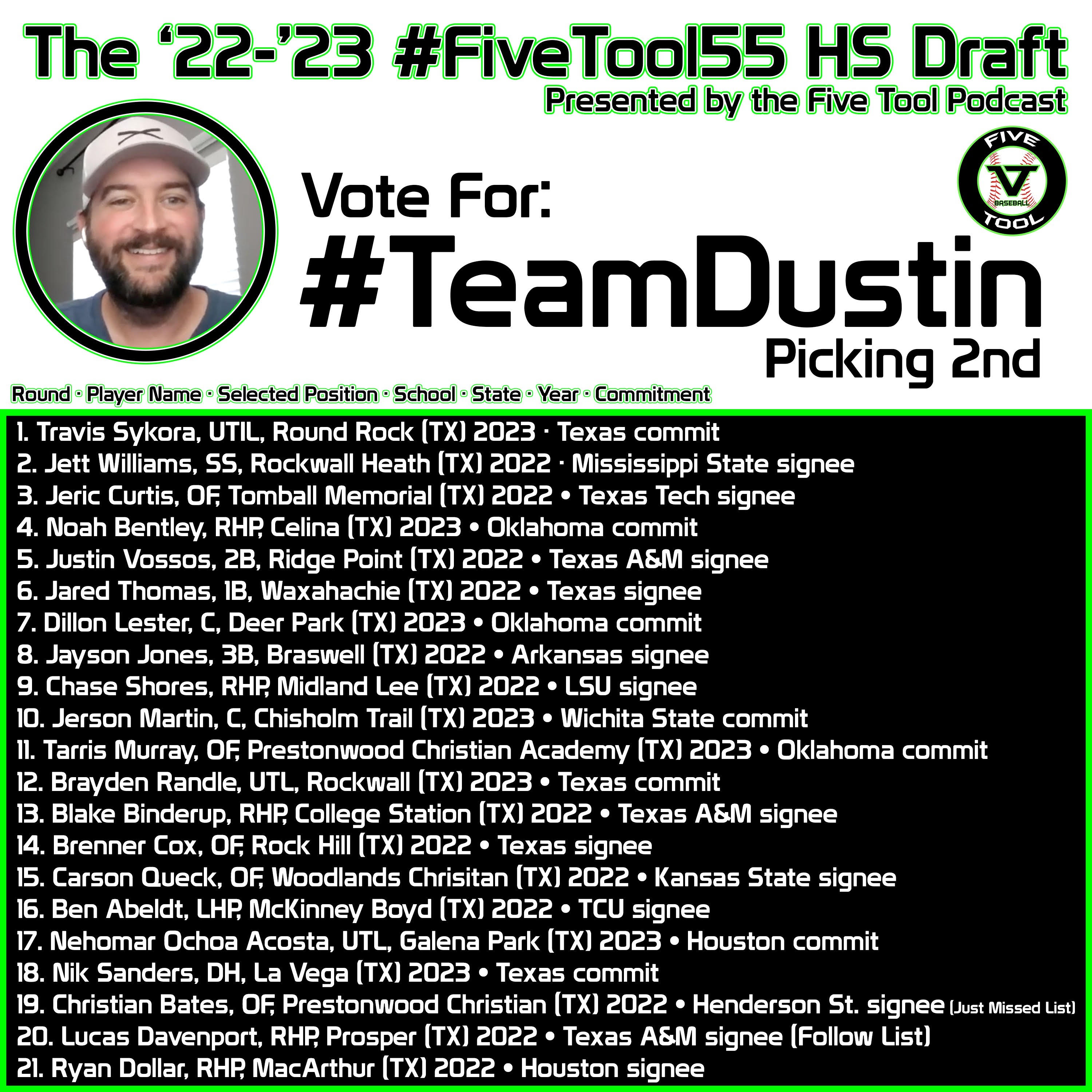 Again, make sure you listen to our podcast HERE and cast your vote HERE. Thanks for tuning into our coverage. Soon, we’ll have actual high school games to write and talk about.