The final 2022 Five Tool 55 welcomes six new names to the list. A few of these players we’ve known for months were going to make the list somewhere, but in the case of a couple others, they were so extremely good they made a very strong case to be added. In addition to talent, skill, tools, stuff, etc., we try to reward performance, especially against some of the state’s top competition or in one of the premier events against great teams and players. The six new members: 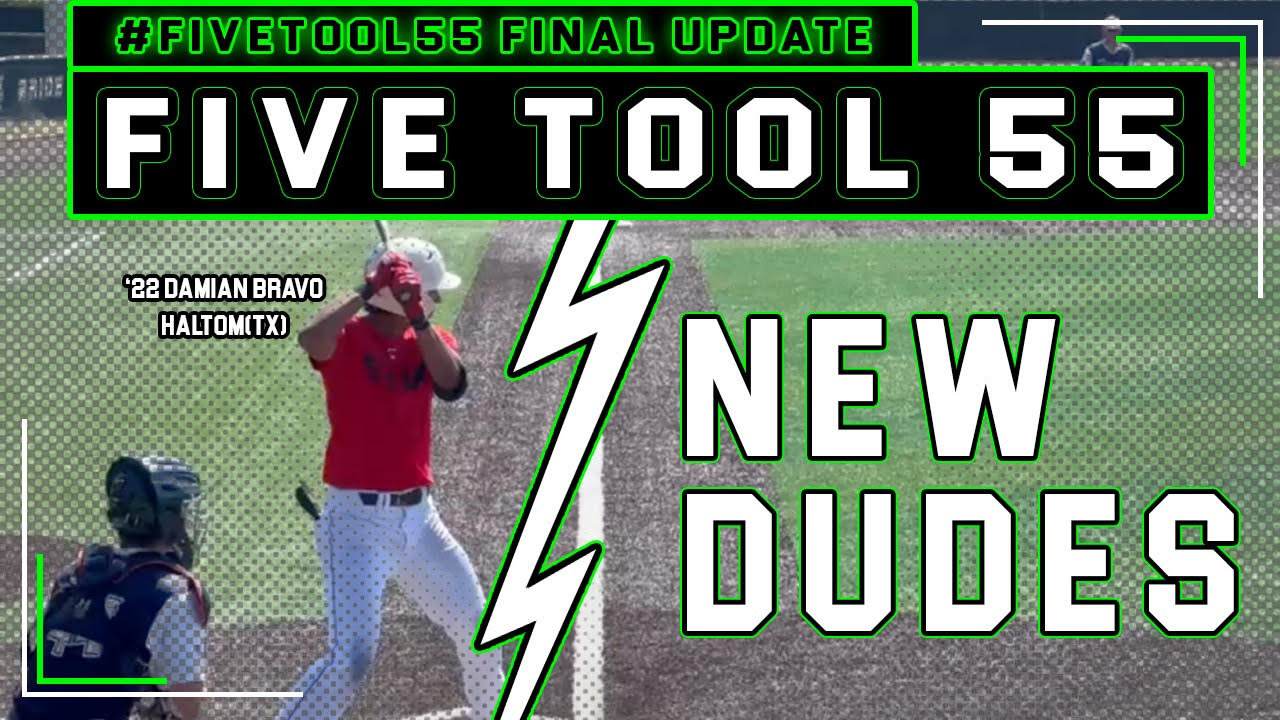 Bravo was one of the best players during the recent Connie Mack AABC World Series qualifier and repeatedly stood out in an event filled with some huge names and top talent. And he stood out on the mound more than I anticipated because I know how much Texas Tech likes him as a hitter. He hit, he hit for power and he got on the mound and bumped 90 MPH with his heater before showing a swing-and-miss changeup against lefties and an intriguing slider.

🌳A Bravo bomb into the trees!@StixBaseballTX 2022 Prospect’s Damian Bravo (@bravoo2248) blasts one to left for a solo home run in the 5th. Makes it 7-5 in Game 2 of the @FiveToolTexas @conniemackwsbb Championship Series. #FiveToolPower

When Texas Tech grabs a commitment from a hitter early, it’s usually a really good sign the player can truly hit. Bravo was so intriguing on the mound Texas Tech coaches might want to see if he can throw some out of the bullpen, too.

Ballgame No. 1 of the @FiveToolTexas @conniemackwsbb Qualifier Championship Series.

In a playoff game, Evans threw a complete game shutout and gave up just one hit and struck out 16 batters. 16! And he needed just 82 pitches to do it. It wasn’t the only one-hitter the future Yale Bulldog threw this season and his changeup is a current plus offering that might be the best changeup in the state. While he doesn’t light up the radar gun with premium velocity, Evans can flat out pitch, has plus control and there’s room for physical projection and some tweaks in the delivery to unlock more. I’m not going to pretend to be an expert on Yale Baseball, but my guess is there’s a real chance Evans immediately slots into the weekend rotation.

Tate Evans (@tateevans16) was masterful in his CG one-hitter today. The RHP K’d 7 with the most disgusting changeup. Maintained velo with 0 BB in 8-0 victory. #DudeAlert

Reid finished last summer with a bright green arrow beside his name and Oklahoma State quickly secured his commitment and eventual signature. We saw Reid in the fall with the Blue Jays scout team and it was an intriguing look, but the fall can be hit-or-miss for pitchers; they’re coming off a long summer and the stuff and velocity are usually down for obvious reasons. Unsurprisingly, Reid looked better during a very strong season, which included a dominant, 14-strikeout performance across 5.1 shutout innings during the Five Tool/S2 Cognition Game of the Week. The fastball held its improved velocity and the breaking stuff missed bats routinely.

Locked in outing tonight from Dominick Reid (@DominickReid5) in the @S2Cognition @FiveToolTexas DFW Game of the Week. The RHP K’s 1️⃣4️⃣ in 5.1 IP with 0 ER.

Davenport making his debut on the list, during its final update, is easily explained: we finally got to see him. The big righty was a guy we didn’t get to see last summer and didn’t get to see in the fall because he didn’t pitch for Blue Jays Scout Team. Once we saw the big, tall, lanky Prosper right-hander pump the gas each time he was on the mound and rack up whiffs, it was obvious he was a Five Tool 55 talent.

A look at Lucas Davenport (@LucasDavenport_) from the 2nd inning on today. The RHP topped 94 MPH in the first and struck out six in 5 shutout innings.

There is a senior pitcher in Texas who comes almost completely out of nowhere – emphasis on “almost” because it’s not like no one heard of Jack Livingstone before – to become one of the premier arms in the state. Lovejoy’s loaded roster attracted a crowd this year and Livingstone ended up becoming the star on the mound, especially once he threw back-to-back no-hitters. After the first no-hitter, Texas Tech jumped in to flip his commitment from Temple JUCO.

A tall right-hander with a quick arm, nothing Livingstone throws is straight – sinker up to 92 MPH; cutter up to 91 MPH; slider around 82-84 MPH; and changeup at 77-80 MPH. A very good competitor on the mound, Livingstone could become a Friday night starter at Texas Tech and the worst-case scenario is likely a good backend bullpen option.

Leadoff hitter and stud pitcher for the 6A state champions, Proksch arguably impacted his team more than any player in 6A baseball. On the mound, the lefty finished the season with a 0.974 ERA, after pitching in the state title game, with 108 strikeouts and 22 walks across 64.2 innings. He also hit .371/.482/.652. Not bad for a guy who is a better pitching prospect than hitter. At least I think he is… Anyway, when my head was spinning during my first weeks with Five Tool, I saw a couple innings of Proksch throwing in the summer for Stix Scout. I was intrigued but wondered if he could repeat the unique delivery, which is an uncomfortable look for hitters, enough to throw strikes, get to his breaking ball and command the fastball.

Owen Proksch (@owenproksch6) goes 5.2 tonight with 8K. Had a lot working for him mixing in 3 pitches with his fastball up to 89 MPH. Tough to hit the changeup from this LHP.

Well, the Duke signee didn’t just repeat his delivery; he dominated the competition and finished the season the MVP of the 6A State Championship Game. Yeah, the lefty has one of the most visible arm paths in the back you’ll see from any top left-handed pitcher, but his shoulder strength and ability to rotate his shoulder and get his arm and elbow into a good position after foot plant is why he’s able to fire quality strikes despite the unique look. A strong athlete, Proksch makes the delivery work in part to his lower half strength, and more of that in the future should help. And like his teammate Griffin Herring, Proksch was a big-game performer and was part of arguably the most dominant postseason rotation in the nation.