The top of the list was easy to figure out. Sure, there was some discussion about who to slot and where, which is shown in the movement of some prospects. But generally, we’ve known the names that would be in the mix in the top 15 or so for a long while. Instead, the final few spots were the most difficult to figure out and it made limiting the list to 55 instead of 60 a pain in the you know what. It’ll read as a cop-out, but the truth is every single one of these prospects listed below have a very good case to be No. 55 on the list, and I hope they reach their high potential at the next level. Players who just missed the cut: 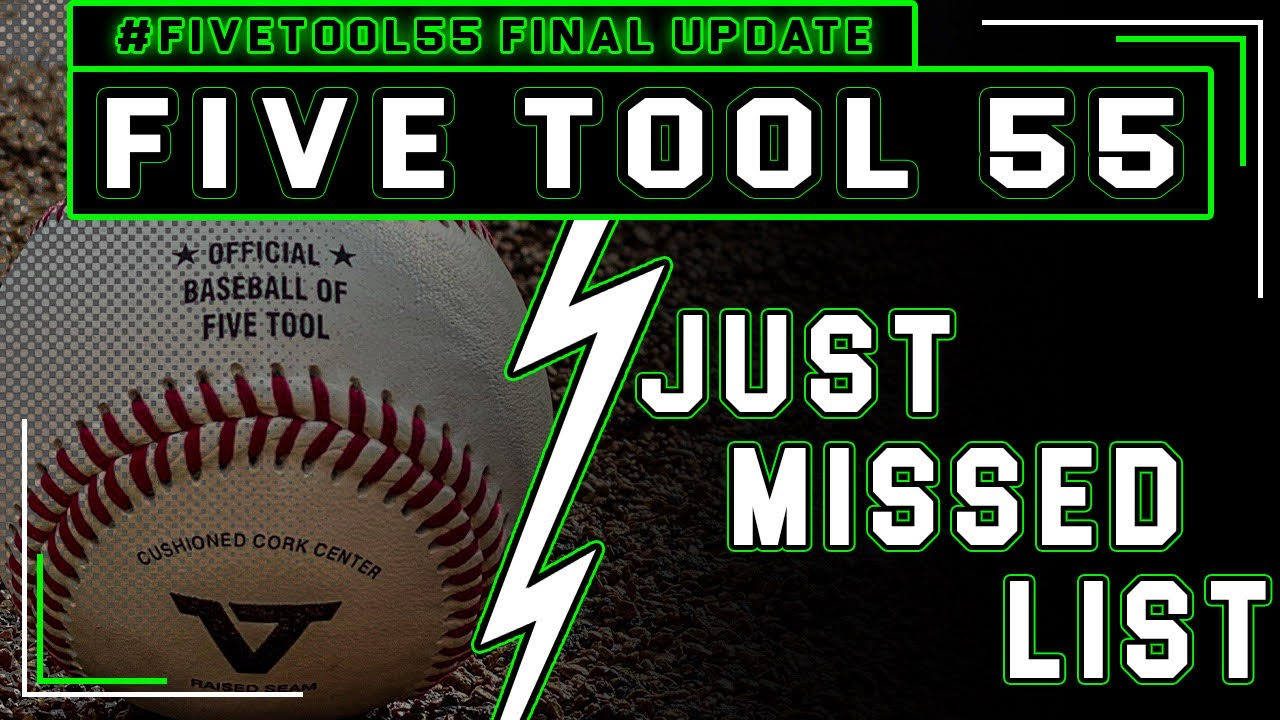 Douglas Bauer – RHP – Lamar
A one-time USC commit now slated to go to Tyler Junior College, Bauer was the toughest player to leave off the list. I watched his start versus Episcopal at Brenham’s Fireman’s Park (you can read that breakdown HERE) and for three innings it was some of the best stuff I saw all season – a true four-pitch mix of fastball, curveball, slider and vulcan-change. In the fourth inning, the velocity dipped and his outing soon ended. The delivery comes with enough effort to make me wonder if his professional future is in the bullpen, but it also comes with a unique, singular focus from pitch to pitch; clearly working on improving the shape of his stuff and repertoire, Bauer pounded his glove with his fist when executing a slider he had been working on for a strikeout. You don’t see that type of focus and appreciation and value of execution from a high school arm very often.

Douglas Bauer (@DBauer2022) with a nice outing on the bump. The RHP struck out 8 in 4 IP. Continuously pounded the zone and made opponents miss.

Bauer helped lead Lamar to the playoffs and ended the season with an absurdly good 0.57 ERA across 61.0 IP with 70 strikeouts. He’s tall, long and has yet to truly fill out. He also bumped 94 MPH, too. I wouldn’t be surprised if he goes to Tyler, becomes one of its best starting pitchers and is deciding between a D1 program of his choice or a draft slot.

Marshall Lipsey – OF – Spring Hill
I first saw Lipsey last summer in the AABC Mattingly World Series and he performed well with the bat atop the 5 Star Performance lineup. He followed a strong summer with a strong senior season, too. He’s a good bet to hit at TCU but the strong push of some players making their debuts on the list meant some having to come off, unfortunately.

.@FiveStarPB 17U National's Marshall Lipsey (@LipseyMarshall) rips a laser to straight away center for the RBI double.

Jake Duer – OF – Flower Mound Marcus
Duer stood out this season for one of the best seasons in the state and has really taken off as a left-handed hitter, which led to TCU making a quick move to secure his commitment and eventual signature a long time ago. If he grows into more power, leaving him off the list could look foolish because the bat has a chance to be a standout tool. As I type this, I think he just recorded another hit in the Five Tool Collegiate League.

Jake Duer (@DuerJ2022) absolutely smokes this ball to right for a 2-run home run cutting the deficit to 9-6 in the top of the 7th with one out. #FiveToolPower @MarcusBaseball (TX) 2022 • @TCU_Baseball signee pic.twitter.com/ldEZMqHLgk

Jacob Rogers – RHP – Friendswood
Rogers was one of the most intriguing right-handed pitchers I saw last summer and after. I strongly believe if his fastball shape improves at Texas Tech, assuming he ends up in college, there’s a new level of strikeout potential he can unlock because he has a really quick arm and quality strike-throwing ability. We like to reward big-time performance and Rogers played a huge role in Friendswood reaching the 5A state title game, but call Tate Evans the coin flip winner because of the strikeouts he racked up.

.@MarucciEliteTX 2022 Thames’ Jacob Rogers (@jacobrogers_4) with a smooth 1st IP. The RHP works with an electric FB and big CB to collect 3 K.

Zack Zavala – MIF – Georgetown
If he didn’t deal with a nagging injury for much of the season, it’s likely Zavala would have made the list. The list of players this season who timed Travis Sykora’s fastball and put a barrel on it with confidence is very, very small. In fact, the only one I know for sure who did it during the high school season is Zavala. Playing the game defensively with good actions, on the bases and getting into the batter’s box with an innate ability to get on time seemingly come natural to him.

.@GPSTEXASBASEBA1 17U Puffer's Zack Zavala (@zackzavala3) lasers one to left for a 2-run single and advances to second on the throw home.

Ryan Black, Jr. – 2B – Mansfield Lake Ridge
There’s an “it” factor with Black, who has a natural feel for hitting from the left side and doesn’t get overwhelmed in the batter’s box. He caught our attention during the fall with the Blue Jays Scout Team and led Mansfield Lake Ridge to an excellent season. At UTA, he projects to be a bat-first second baseman capable of hitting at the top of a lineup. In the end, there wasn’t quite enough power projection and speed to put Black on the list, but he’s capable of going to UTA and hitting so well it makes us look silly.

Ryland Urbanczyk – RHP – College Station
Urbanczyk finished the season very strongly after working back from elbow surgery, and I watched him retire 15-straight Brenham hitters on the road in a big playoff game (you can read that report HERE). His best baseball is ahead of him because physically, he projects to fill out, get noticeably stronger and should be able to log a lot of quality innings at Rice if the fastball quality ticks up and the command tightens to pair with a future plus changeup.

Zachary Royse – RHP – Cinco Ranch
Royse created a lot of buzz during his senior season and attracted pretty much every area scout to get a look. When I saw him against Katy, his fastball touched 93 MPH and his slider flashed as a future above-average offering when it had true shape and a shorter, tight break compared to the more slurve-like offering. He’s a big right-hander who profiles to be a physical starting pitcher at the next level and could, sooner than later, emerge as a Friday night arm for UTSA.

Damian Ruiz – RHP/INF – Livingston
An athletic two-way talent with interesting offensive tools, Ruiz started creating a real buzz at the end of his senior season with his work on the mound. Unfortunately, I wasn’t able to squeeze in a look at what he was like on the mound and he didn’t receive much coverage, likely a really good thing for HBU where he should make an immediate impact. A standout football player, Ruiz is a dynamic two-way talent with physical upside. Keep an eye on him.

Brian Panneton – RHP – Tomball Memorial
Panneton doesn’t light up the radar gun, but he’s a winner with the best control and command I saw from any senior pitcher the last 12 months. The right-hander issued just four walks this season, can throw four pitches for strikes, and is an intelligent pitcher capable of holding his stuff and delivery all game.

This slider is UNTOUCHABLE.

Brian Panneton (@brian__bsp) has pounded the zone, striking out 3 through two perfect innings of work.

Zane Petty – RHP – Corsicana
A high-waisted athlete with a very quick arm, the fastball comes out of Petty’s hand with a lot of sizzle. I saw him up to 92 MPH recently with an interesting breaking ball and there’s more in the tank, especially as he matures physically.

Rashawn Galloway – C – Boerne
Against Justin Lamkin in the playoffs, Galloway, an athletic catcher who was also a good football player, took the best at-bats against one of the state’s best pitchers. I liked the energy and confidence he played with, his swing and the way he moved behind the plate. If he’s able to stick at catcher at the next level, he’s going to hear his name called in the MLB Draft after a few seasons.

Hits have been very few and far in between, but Rashawn Galloway (@RashawnGalloway) picks up his second knock of the night with the leadoff single to left here in the top of the 7th. #FiveToolHitting #DudeAlert @GreyhoundBSB (TX) 2022 • @TxStateBaseball signee pic.twitter.com/BWF5J1AOzV

Dylan Maxcey – C – Friendswood
There’s just something about this guy. Maxcey stood out last summer and proceeded to hit .468/.537/.786 for 5A state finalist Friendswood. He has a true chance to stick at catcher, is an impressive athlete and turns talent into production at a high level. Yeah, he’s not the biggest with the loudest tools, but he’s a winner who impacts the game in a variety of ways.