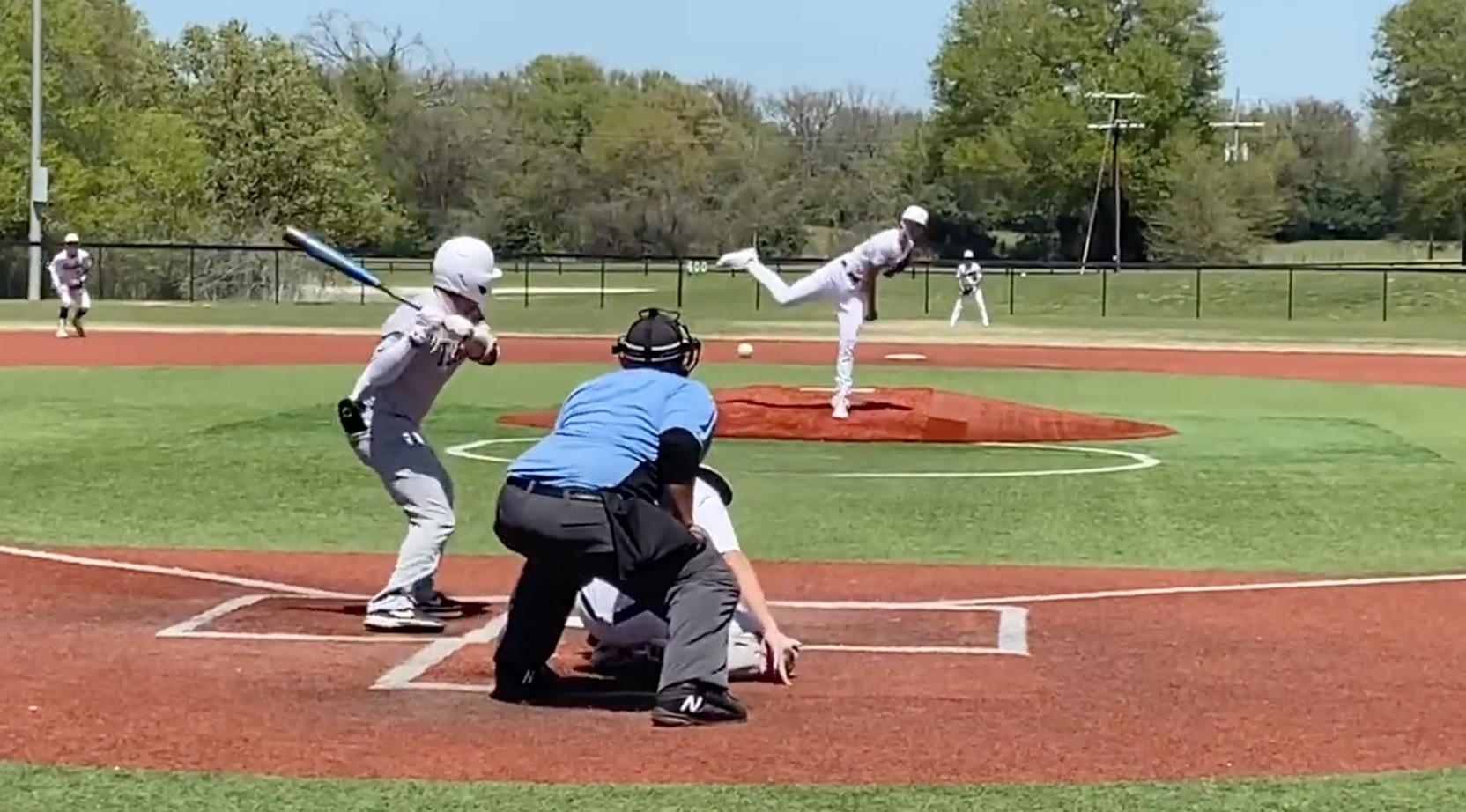 A picturesque Sunday afternoon and the beautiful Franklin Community Ranch played host to Twelve Baseball’s “Twelve Showdown” event, featuring a seemingly endless amount of talented 12, 13 and 14U baseball teams. Five Tool and S2 Cognition were on hand for the weekend and I made the trek across Central Texas to get some eyes on Sunday’s competitive 14U action. Scout notes:

Admittedly skeptical about what I’d see at the youth level, I was blown away by the talent on the Twelve 14U Black team. I can’t imagine many 14U teams in the country that could beat this group. Right-handed starting pitcher CJ Sampson touched 84 MPH and flashed a legitimate four-pitch mix – fastball, slider, curveball, changeup – and stunningly advanced ability, particularly his execution, for his age. He’s just one of many names from the team to remember and he swung the bat exceptionally well from the left side, too.

.@TwelveBaseball Black’s CJ Sampson strikes out the side in the 4th.

On the hitting side, the list of standouts in the action I saw is lengthy. Left-handed hitter Clayton Crosby looks like a future physical, power-hitter with impressive athleticism for his age/size and bat speed. Right-handed hitter Jud Dowell, who was up to 81 MPH on the mound the day prior, showed noteworthy bat speed and profiles as a future all-around awesome talent. He had the hardest hit ball I saw when he sent a screaming liner to the fence in right-center field.

Infielder Daylen Foor showed advanced defensive actions and carried himself beyond his years; I bet his S2 Cognition score is strong. Add Harper Gates, a right-handed hitter, to the list of guys who don’t get cheated in the box and unleash bat speed capable of hammering and lifting the baseball with authority. Left-handed hitting outfielder Bryce Nixon aims to pull hard liners, but did smack one hard up the middle for a knock, too.

Catcher Tyler Ramos had a 2.2 pop time in warmups, back-picked a runner at second base and projects as having a real chance to stick behind the dish defensively. Karson Reeder used a lower slot look from the right side to toss 5.0 shutout innings and also drilled a hard double to the wall in left-center field. Major projection candidate. Davidenko Rodriguez, a talented, switch-hitting infielder, oozes gamer and plays the game like a true baseball junkie.

Walker Anderson already looks like an intriguing two-way talent showing explosive actions and quick-twitch movements. He was up to 78 MPH on the mound and looked like he’ll have a chance to stick at shortstop with a promising bat.

Shortstop Jordan Fowler showed a strong arm across the diamond, a good baseball clock and took aggressive left-handed swings with bat speed and an attack angle to drive the ball in the air. Later in the game, Fowler cut down on his swing later in the count to record a base hit. Coy Becka, a right-handed hitter, drilled a hard double into the gap and Keaton Johnson, another right-handed hitter, displayed good pitch recognition when he sat back on a big breaker and hammered it.

.@TwelveBaseball Maroon’s Jordan Fowler saves a run as he makes a nice backhand stop and fires to first for the out. #FiveToolDefense#TwelveShowdown pic.twitter.com/AisJrKjOu6

Some of the best defense of the day belonged to right fielder William Barrett. He made a very athletic, tough catch and showed off an impressive arm to complete a double play.

Evidently, I missed a show because left-hander Drake Bentke punched out 14 across 6.0 shutout innings earlier in the event. When I saw him, the tall, very projectable left-handed hitter showed off a smooth swing with feel for the barrel and ripped a couple of hard extra-base hits.

Cooper Cortez moved around with a ‘gamer’ vibe on the diamond and hit a very hard line drive. On the mound, he had an advanced feel for control and command and could develop into a future strike-thrower with multiple pitches. Against a good heater, right-handed hitter Tate Campbell timed the pitch and ripped a screamer back up the middle for a knock.

.@TwelveBaseball Platinum’s Cooper Cortez sits back and rips one to right field for a single.#TwelveShowdown pic.twitter.com/llKC85lNuY

How about this: 13U catcher Julian Suarez, who was playing up with 14U, ran 4.33 down the line on a hard ground out to second base. 4.33 seconds from the right side! He hit the ball hard the opposite way multiple times and looked like a future athletic, quick backstop.

The best swing of the day came against the best arm of the day: Davian Garcia, a right-handed hitter who moved around well in center field defensively, timed a hard fastball from Simpson and smashed a two-run bomb out to left-center field. And these weren’t small fences.

Right fielder Kason Kolle put together consistently competitive at-bats, timed a hard fastball up in the zone from Simpson and lined it into center field. He also showed a very strong arm that could profile in any outfield spot. On the mound, Kolle showed that arm strength with a heater up to 82 MPH with some arm-side run.

All Jake Earnest did from the left side was hammer the ball over and over and over again. In the game I watched, he smashed pitches three separate times and displayed an advanced feel for the barrel. He also tracked the ball easily and naturally in the outfield.

Jeremiah McCranie was pound-for-pound one of the best 14U ballplayers during Sunday’s action. He rountely created some surprising pop given his small frame and made an excellent defensive play in the infield with the infield in during a late-game situation. The game came naturally to him.

Left-handed starting pitcher Aiden Verrette has the chance to develop into a physical strike-thrower with a changeup capable of neutralizing righties and creating swings and misses. He competed well on the mound and his misses were often in good spots near his target.

.@TwelveBaseball San Antonio Aiden Verrett lines one the other way for a single to lead off the 6th. #TwelveShowdown pic.twitter.com/wF8n4jMCFV

Outfielder Keegan Ibe is a ballplayer, period. He burned a center fielder with a hard two-RBI double, made an excellent diving catch in center field, and hit a hard single in the bracket championship against a good pitcher. Jace Dixon took some of the best swings on the team and created some loud contact multiple times.

To any Twelve Baseball parents reading: Get the S2 Cognition testing results. Don’t waste the opportunity to receive perhaps the most important piece of baseball information you’ll ever have access to. Yeah, I’m biased. But I’m biased because I’ve seen the nearly unbelievable correlation between the results and what’s actually going on in a player’s mind. S2 Cognition is able to quantify the mental side of the game in a way no one has before, opening a path to player development previously unavailable.