As the fall season winds down, I spent Saturday in Katy, Texas at Cotton Ranch, the home of Twelve Baseball. Some uncommitted members of the 2023 class participated in batting practice, a quick in-and-out session and played a six-inning controlled scrimmage. The group included several players who should soon find a college home, but there was one in particular who really stood out: 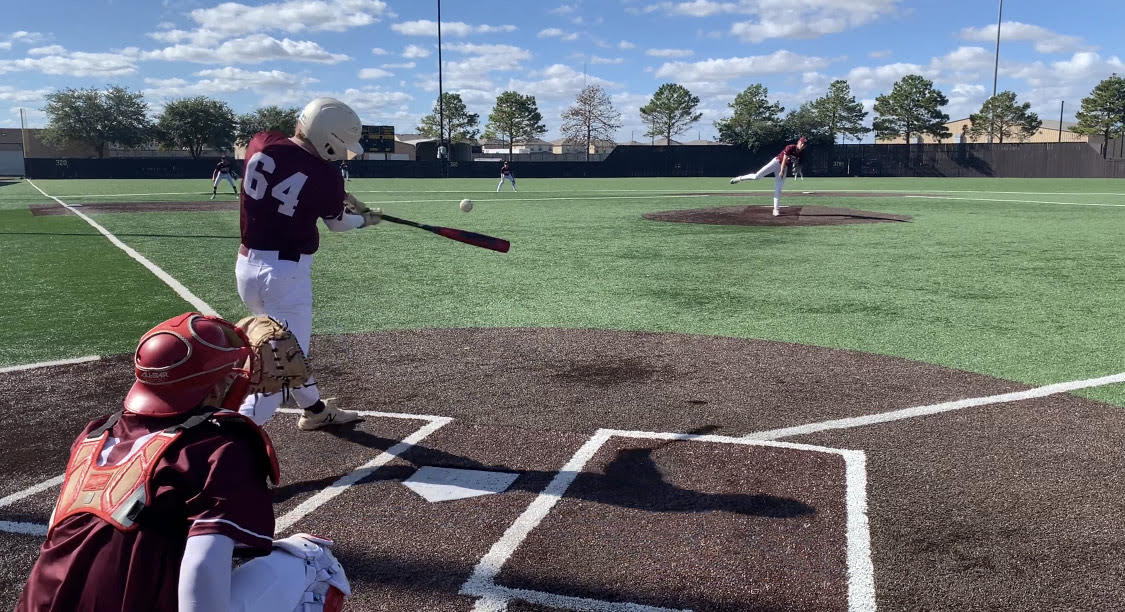 Put this guy on #DudeWatch

The Woodlands’ Logan Ellefson is going to make a college program very happy sooner than later. Before I get into his tools/talent/skill, let me first describe what stuck with me the most after watching Ellefson: he hit a routine, shallow fly ball that appeared like a fairly easy play for the second baseman; when the second baseman couldn’t catch the ball cleanly, Ellefson was able to reach second base. Why? He didn’t jog and give up on the play. Even in a controlled, fall scrimmage against teammates with no score being kept, the uncommitted infielder from The Woodlands hustled in a situation where many players would give up on the play. And he then stole third on the next pitch.

This is who Ellefson is. And he can also hit with a good feel for covering the plate and making contact with a low whiff rate. During batting practice, the way Ellefson, who is listed at 5-10, 150 pounds, hit through the baseball created some carry into the gaps and his swing resulted in easily the most productive day during the scrimmage. He can also run, too. The right-handed hitter ran 4.11 seconds down the line and his speed and impressive athleticism translate to all areas of the game.

I’d be lying if I said I knew Ellefson had a true chance to stick at shortstop after watching in-and-out and six innings, but he gets the ball out of his glove quickly, plays with confident hands and actions and should play there for one of the best teams in the state this upcoming season. Regardless, he could slide over to second base – I think his arm and arm action fit better there than shortstop long-term, which was my takeaway after seeing his standout performance at our SHSU event in June – just fine and has the speed and athleticism to play in the outfield. He’s definitely a D1/top JUCO prospect and plays with the type of energy and competitiveness coaches would want to rub off on teammates.

Katy is going to be very deep on the mound…

Right-handed pitcher Andrew Hilton, a 5-11, 160-pound prospect, should help Katy again compete as one of the top 6A teams in the state. It was my third time to see Hilton and my general takeaways were the same: his low-spin changeup has a chance to be a bat-missing pitch, especially against left-handers; his low release point and vertical movement make his fastball especially interesting and there’s a chance to get a lot more out of the pitch, which was up to 86 MPH (I’ve seen him up to 89 MPH in the past), because the spin rate data is below average; betting on arm speed is typically a good bet. His batting practice rounds were solid, too, but he’s undoubtedly a pitcher at the next level.

A potential diamond in the rough?

Tompkins prospect Aryan Chopra was a name I wasn’t familiar with heading into Saturday, but I left thinking a college could soon land an under-the-radar, intriguing talent. A right-handed hitter, Chopra, who is a very thin 6-0 with a narrow waist, reached out late in the count to put a ball in play up the middle and turned it into an infield single by running 4.01 seconds down the line. Later, he smacked a hard liner up the middle for a single and carried himself confidently in the batter’s box.

On the mound, Chopra is raw – inconsistent extension, delivery and release despite present athleticism – and his delivery creates a bit of a funky look for hitters because he opens up early and creates an over-the-top look for hitters. But opposing batters didn’t pick up his stuff well out of his hand, which included a fastball up to 87 MPH, and he struck out the side in his only inning. He played third base during in-and-out and could also profile in the outfield, too.

– Right-handed pitcher Kaden Bertrand should play a key role at Tompkins this season. He threw a lot of strikes (FB T85) during his two innings on the mound with a three-pitch mix that featured a curveball with some depth that gave hitters issues.

– Katy catcher Reese Ruderman, a first-team all-district pick last season, takes a lot of pride in his defensive work and competes well in the batter’s box. Benjamin Torres, an outfielder and catcher from Bryan High School, caught my eye with his receiving and pulled a hard single during game action.

– Left-handed hitting outfielder fielder Brandon Welch (Tompkins) has some raw power he hasn’t yet tapped into and projects as a physical prospect who probably fills a corner outfield spot at the next level. He had some of the best batting practice rounds. Darius Woodson (Tompkins), another left-handed hitting center fielder, played quicker than the stopwatch in center field and showed an accurate arm.

– Aidan Garza, a left-handed hitting second baseman from Legacy of Sports Sciences, has room to fill out physically, makes contact at a high rate and had some of the most consistent batting practice rounds, which translated to a single during the scrimmage. Right-handed hitting second baseman/outfielder Angel Esquivel (Jersey Village) showed bat speed during batting practice and had a productive scrimmage with the bat.

– It didn’t show during game action, but I liked the right-handed swing and batting practice rounds from Tompkins first baseman Adrian Isaaccura. Weimar’s Brady Henke is a physical 175-pound infielder, wants to be around the baseball and is comfortable going the other way with an inside-out approach. He made a slick defensive play in the hole at second base and his skill comes alive during games.