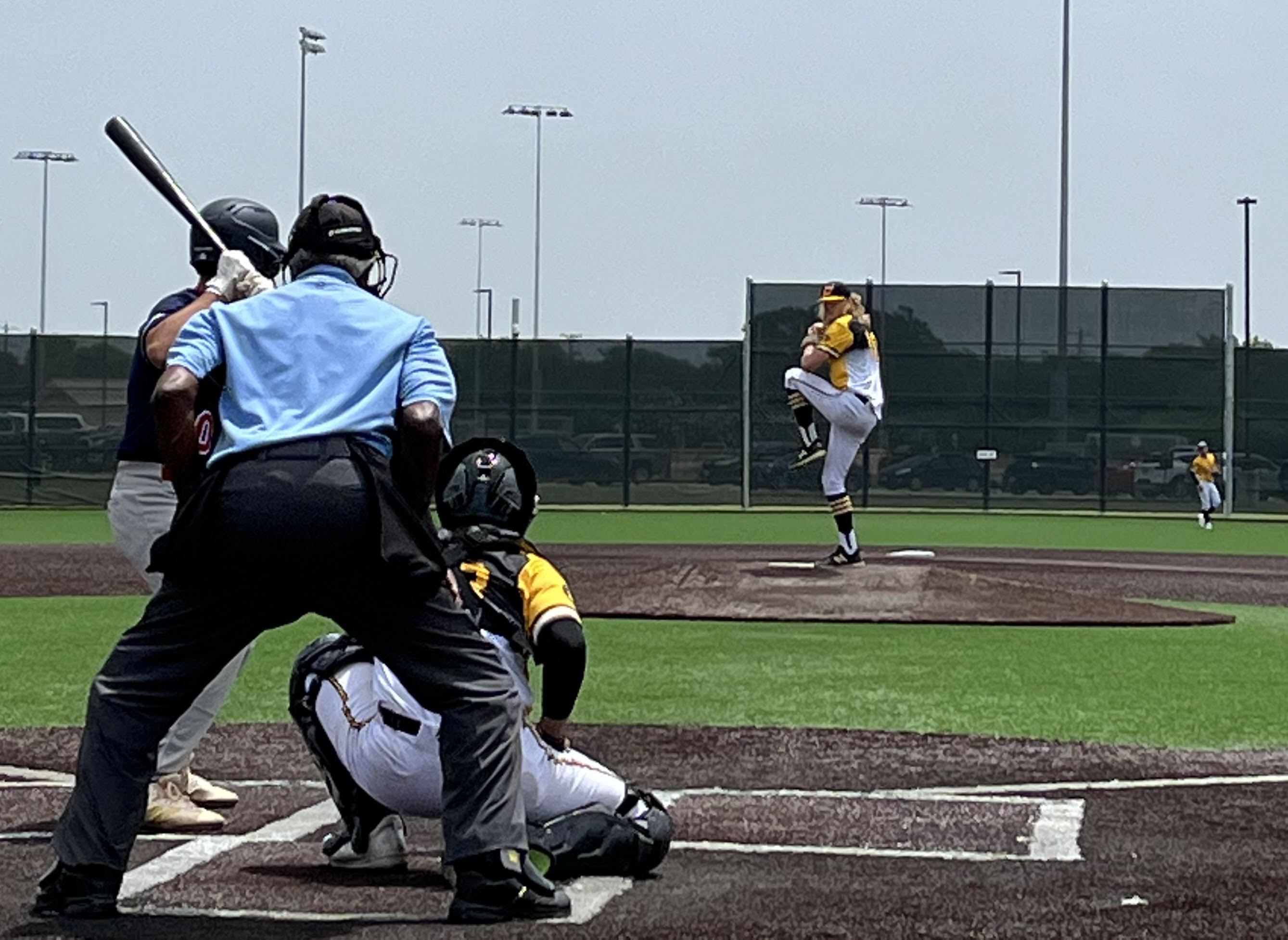 We’re biased, but we think the 2022 Pudge Rodriguez World Classic, presented by Academy Sports + Outdoors, was a smashing success. The event, which began June 14th and featured 48 of the top 16U or younger teams you’ll find anywhere, provided the next crop of emerging stars a seemingly endless amount of opportunities to stand out in front of college coaches; it also featured two-straight days of 20 games at the Z-Plex Texas Sports Village in Melissa, Texas before the bracket’s contenders emerged and elimination games occurred.

That’s a lot of baseball and for Five Tool evaluators, like myself, bouncing around from game-to-game, field-to-field meant enough looks to make your head spin. Hey, it’s a good problem to have. So, we decided to break our Scout Notes into four parts, one for each bracket appropriately named for Pudge Rodriguez – Rangers, Marlins, Tigers and Yankees.

Again, our eyes can only be in one place at one time, but we’ve done our best to feature standout players and performances from the event with more focus on the teams that emerged as the best from their respective bracket. And part two features the Tigers bracket, which was won by Texas 5 Star Performance 2024 National.

The frontrunner for #TeamHair honors, 5 Star Performance 2024 National was one of my favorite teams to watch because its roster checked all the boxes – physical, athletic, skilled, speed and loud stuff on the mound. By now, most people know who Forney’s Aiden Sims is and he’s firmly in the mix as the future No. 1 prospect when the 2024 Five Tool 55 debuts because he possesses, basically, everything you want to see in a rising junior on the mound. But the right-handed pitcher is a legitimate two-way talent, too, and really stood out with the bat from the left side.

.@FiveStarPB 2024 National's Aiden Sims (@AidenSims4) cranks one past the diving right fielder for an RBI double.

Sims wasn’t the only pitcher who really stood out. Texas commitment Matthew Millett, a right-handed pitcher from Lake Ridge, touched 92 MPH and overpowered hitters in a short stint with a loud three-pitch mix. As Millett matures and grows into his frame, which has projection remaining, added efficiency to his delivery and arm action should unlock even more velocity.

Admittedly, I didn’t know as much about Jack Sharp, a Rockwall-Heath product, as I did the two names above, but he showed he could be a major D1 prospect. It must be nice to coach Rockwall-Heath because the list of intriguing arms never ends. Sharp utilized a simple, repeatable delivery with a quick arm and pounded the zone to the tune of 6.0 innings, one hit, one walk and 11 strikeouts. While the fastball touched 88 MPH, the breaking ball was a swing-and-miss weapon also used early in counts on both sides of the plate. Immense upside.

.@FiveStarPB 2024 National’s Jack Sharp (@JackSharp_4) had an stellar outing today at the #PudgeWC. Induced a lot of swings and misses with both of his pitches. The RHP dealt 11K through 6 IP.

An imposing presence in the batter’s box and on the mound, Lubbock Cooper standout Timothy Haynes emerged as one of the most intriguing talents in the event. On the mound, he made two starts and didn’t give up a run across 9.0 innings with nine strikeouts and zero walks; as a hitter, Haynes, who bats and throws right, hit .353/.577/.706 with a homer, three doubles and six walks compared to just two strikeouts.

.@FiveStarPB 2024 National RHP Timothy Haynes (@tw_haynes) picks up a pair of punch outs in the top of the 2nd.

The game comes easy to him and for a player with such a big, imposing frame, he really controlled his movements on the mound well and unleashed a coordinated, quick bat in the batter’s box with a dangerous barrel. He’s one of those hitters who makes the bat and field look small because of his size and power and the barrel control and plate coverage were both impressive.

By now, you understand why this team was one of the final ones remaining despite losing its opening game. Harrison Wall’s physical build and hitting ability stood out; Jake Overstreet looked like a D1 caliber catcher with solid work on both sides of the ball; Drew Smith is a good athlete who can run; Zeke Seoane’s left-handed swing was among my favorite to watch; and Sawyer Dunagan’s all-around tools flashed.

Another big, physical team college coaches will want to spend some time watching, LBA Deck competed very well thanks to its talent level and mental makeup. Left-hander Bryce LeBlanc (Lubbock Cooper) made two appearances on the mound and punched out 12 across 6.0 scoreless innings.

A look at Lubbock Baseball Academy Beck’s Bryce LeBlanc (@bryceleblanc101). The LHP went 2 IP with 3K and no hits.

He gave up just one hit and walked three. Nothing LeBlanc, who is a 6-7 dual-sport athlete with plenty of room to pack on some more muscle, threw was straight and hitters had a very difficult time making hard contact. Although he didn’t have a strong statistical event with the bat, I was intrigued by his swing and potential.

.@LBKBaseballAcad Deck’s Brooks Roberson (@BrooksRoberson3) tossed the ball well this afternoon and finished his outing with 5K in 4 IP.

College coaches will surely be tracking another tall righty from LBA Deck, Frenship’s Brooks Roberson. The 6-4 righty touched 85 MPH with his fastball and showed a sinker with noticeable horizontal break, hard curveball from 73-78 MPH and an intriguing changeup. The tall righty’s shoulder position at foot plant gives hitters an overhand look and they seemed to struggle with his curve from that look. He cruised through 4.0 shutout innings and gave up just one hit, walked two and struck out five.

.@LBKBaseballAcad Deck’s Landon Hutcheson (@LandonHutcheso5) rockets this ball to the wall in right for an RBI double.

Offensively, I left a fan of right-handed hitter Hudson Hutcheson (Frenship) and left-handed hitter Landon Hutcheson (Frenship). In one at-bat in particular, the lefty saw a fastball, changeup and curve in the same at-bat and hammered a curve to the wall in right field for an extra-base hit; it looked like he had strong, natural pitch recognition with a promising swing with strength already present. As for the right-handed Hutcheson, he swung a heavy barrel and created loud contact.

Argyle infielder and pitcher Micah Roberts had one of the most productive sessions at the plate and finished with an outstanding .667/.733/.917 slash line in 15 plate appearances. Thin and clearly going to fill out more while growing into more athleticism with added strength, Roberts had good posture and barrel control in the batter’s box, which led to consistent hard contact. Watching his hands work is a treat and he should become a major impact player for a powerhouse high school program.

On the mound, right-handed pitcher Mason Arnold snapped off some sharp breaking balls and frustrated lefties with a quality changeup. He also fired strikes with a fastball up to 86 MPH and gave up just one hit, walked one and struck out six during a 5.0-inning start.

.@USAPrimeBrewer’s Mason Arnold (@m_arnold1023) was dialed in tonight as he only allowed one hit in 5 IP while punching out 6 batters.

– Tobin Eschief, a tall, slender, 6-6 righty from Davenport, touched 88 MPH with a sinking fastball for Canes Southwest. The projectable righty flashed execution of a swing-and-miss cutter at 80-82 MPH and also a changeup that created some swings and misses against lefties, too. Eschief also hammered a couple of pitches from the right side with some raw power. High school and select teammate Tryston Rudewick is an intriguing right-hander on the mound, too.

6’6” Tobin Eschief (@EschiefTobin) was pumpin’ ⛽️ for @TheCanesSW Hearn at the @FiveToolTexas #PudgeWC. The RHP pitched 6 innings, striking out 3 and only allowing 3 hits.

Catcher Isaias Roman used a patient approach in the batter’s box from the right side and has a promising feel for hitting. Keep an eye on left-handed hitter Ethan Wood from Vandegrift because he has some raw power and the ability to pull mistakes over the wall for homers. He finished the event with a .444/.500/.556 slash line.

.@TheCanesSW Hearn’s Ethan Wood (@EthanWood2024) lines a single down the right field line but is thrown out trying to extend it to a double.

– It was obvious to see why DBU left the state to grab an early commitment from Valor Christian and Team Colorado Braves right-handed pitcher Athan Kroll, who was up to 90 MPH with a quick arm.

Palmer Ridge righty Tate Gargasz showed strength throughout his delivery and is a physical pitcher who missed bats during his impressive complete game performance. As he continues to develop, the present strength should push the stuff up even more.

Strong outing from Tate Gargasz (@TateGargasz) for @TeamCOBraves 2024. The RHP tossed a CG and racked up 9K in a dominant effort. Really attacked the zone and challenged hitters.

– MBA Green 2024 right-handed hitter Braiden Catterson (Maple Mountain; Utah) impressively timed pitches with active hands in the batter’s box, finished with a 1.583 OPS and should add strength and athleticism in the future.

.@MTNWESTBsebll 2024 Green’s Braiden Catterson picks up another hit with this one to LCF.