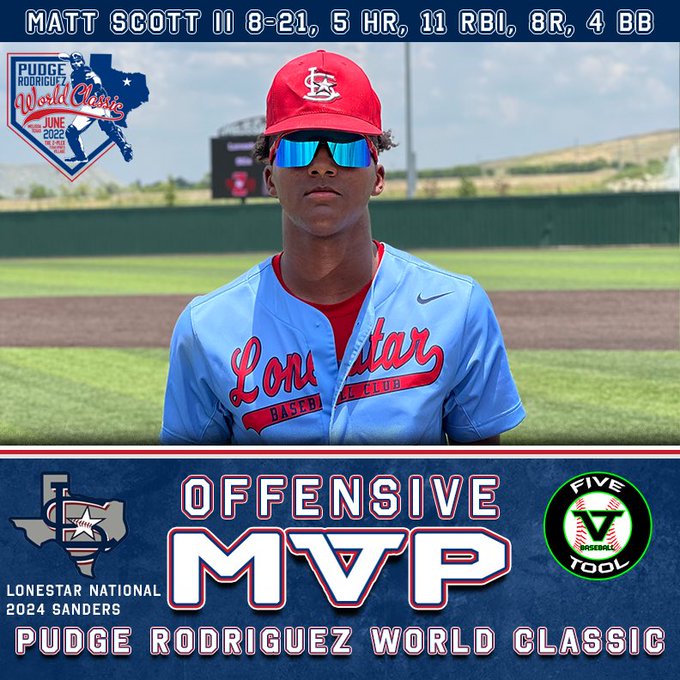 We’re biased, but we think the 2022 Pudge Rodriguez World Classic, presented by Academy Sports + Outdoors, was a smashing success. The event, which began June 14th and featured 48 of the top 16U or younger teams you’ll find anywhere, provided the next crop of emerging stars a seemingly endless amount of opportunities to stand out in front of college coaches; it also featured two-straight days of 20 games at the Z-Plex Texas Sports Village in Melissa, Texas before the bracket’s contenders emerged and elimination games occurred.

That’s a lot of baseball and for Five Tool evaluators, like myself, bouncing around from game-to-game, field-to-field meant enough looks to make your head spin. Hey, it’s a good problem to have. So, we decided to break our Scout Notes into four parts, one for each bracket appropriately named for Pudge Rodriguez – Rangers, Marlins, Tigers and Yankees.

Again, our eyes can only be in one place at one time, but we’ve done our best to feature standout players and performances from the event with more focus on the teams that emerged as the best from their respective bracket. And part two features the Rangers bracket, which was won by eventual runner-up Lonestar National 2024 Sanders.

Oklahoma commitment and Klein Oak outfielder Matt Scott II put on a never-ending power display that included five homers and a .381/.500/1.095 slash line. With relaxed hands extended in front of the letters across his jersey, Scott creates some separation while he unloads and drives the baseball in the air by throwing the barrel through the baseball; the talented right-handed hitter does a good job of getting his hip rotation and some leverage into his swing before making contact, often a tad out in front of home plate.

He’s on FIRE🔥@LonestarBSBclub National 2024 Sanders' Matt Scott II (@MattScottII) delivers in the 7th with 2-run home run over center, extending the lead to 6-2. His 5th of the week at the #PudgeWC. #FiveToolPower

Scott has loud tools and has gotten noticeably more physical since I saw him last summer. He showed a strong arm in right field to go with his power. I would have liked to see him run out grounders a little bit more, but it sounds like he was dealing with a hamstring issue, which would explain that.

.@LonestarBSBclub National 2024 Sanders’ AJ DePaolo (@aj_depaolo) executes the strike ‘em out, throw ‘em out to perfection and fires a seed down to second and knew it the second the ball left the hand. #FiveToolArm

Vanderbilt commitment and catcher AJ DePaolo showed a strong arm, ran 4.2 seconds from home to first, and walked seven times compared to just three strikeouts. He has the ingredients to emerge as a high-level backstop if his receiving skill continues to improve. After seeing him only in the outfield during my high school looks, San Antonio Johnson standout and Texas Tech 2025 commitment Kayson Cunningham played shortstop and has a chance to stick there if the skill continues to progress; his age and lack of game reps showed at times, but so did his impressive instincts, athleticism and arm. Offensively, Cunningham didn’t have a loud event statistically. However, the left-handed hitter smacked a few hard liners, showcasing his advanced barrel control and natural hitting feel. I’m willing to bet on his hit tool more than any other 2025 prospect I’ve seen thus far.

Big, imposing right-handed hitting first baseman Trey Craig swung a quick, heavy barrel that repeatedly created some very loud contact off the bat. He hit .500/.571/.750 with a homer, triple and double. La Vernia’s Cash Casas utilized a very simple approach from the right side to make contact at a high rate.

On the mound, I liked what I saw from left-hander Christopher Perez, who ran his fastball up to 87 MPH and it played up. The Taylor prospect’s 70-72 MPH hook played well off the four-seam look. In the future, added lead leg strength and more consistency to his finish should help Perez throw even more strikes. Liberty Hill right-hander Blaze Milam created a hint of deception with his arm path, rotated his shoulder well, and used his 85-87 MPH fastball and curve, which had an overhand appearance thanks to his shoulder positioning, to fire 6.0 innings. He gave up just one run on one walk and struck out six.

Rhythm, bat speed, and promising bat paths: Mid-Pacific Institute right-handed hitter Coen Goeas did it all and consistently hammered the ball all over the field and over it. He looked like a major D1 talent and finished with a .667/.750/1.111 slash line with zero strikeouts. A strong case can be made that he was the best hitter at the Pudge World Classic.

That's gone!@hawaiielite2g Toro's Coen Goeas (@Coengoeas05) leads off the inning with a bang to left for a solo home run. #FiveToolPower

Isaiah Chaves (Baldwin; Hawaii) swung a noticeably quick, productive bat, but it was his work behind the dish defensively that stood out the most, which is saying something because he was good with the wooden stick. An athletic, agile and energetic catcher, Chaves caught a runner stealing with a 1.99 pop time and looked like a future D1 catcher.

.@hawaiielite2g Toro’s Isaiah Chaves (@IChaves20) is showing out! After a home run and throw out to third, the catcher throws out one of the fastest runners at second. #DudeAlert #FiveToolDefense

I really enjoyed watching left-handed hitter Jace Souza swing the bat. He kept his hands back and extended towards the catcher before it was time to unleash them with some controlled ferocity thanks in part to his rhythm and timing.

.@hawaiielite2g 2024’s Jace Souza (@JaceSouza_) can really swing it. The LHH leads off the top of the 6th with a hard single to right. #FiveToolHitting

His teammate and right-handed hitter Noah Kubo has a thicker, more compact frame than his leaner, taller teammate Souza, but fully understands how to use it in the batter’s box. Kubo (Mid Pacific Institute) smacked baseballs around the diamond utilizing active hands and good bat speed. There’s a noticeable amount of athleticism in Kubo’s swing and he played with an energetic bounce to accompany some quickness.

.@hawaiielite2g Toro's Noah Kubo (@noah_kubo) rips a leadoff single up the middle in the bottom of the third.

Lean, tall, projectable right-handed pitcher Tanner Chun struggled with his control, but flashed one of the best curveballs, along with an 86 MPH heater, during the event – a 66 MPH overhand beauty with tight spin and depth.

Some guys ooze leadership intangibles and exhibit the type of body language that positively impacts teammates. Arlington Martin’s Luke Nohinek is one of those guys. The right-handed hitting catcher, who ended one game with a 1.97-second pop time to catch a runner stealing, hit .364/.462/.545 and was a key part of his team’s wins.

.@MustangsDallas Sharp’s Luke Nohinek (@LukeNohinek) ends the game with a bang as he throws out the base runner at second.

William Yen saw the ball out of the pitcher’s hand well throughout the tournament and walked five times with zero strikeouts. Physical, right-handed hitter Damian Abrol (Parish Episcopal) has a bit of an unorthodox swing in the batter’s box, but his quick, strong hands stood out and helped him emerge as one of the most productive hitters on the team.

Westwood two-way talent Ridge Morgan stood out with the bat from the right side, but he really shined out on the mound. Tall with plenty of room to fill out, Morgan fired heavy fastballs up to 90 MPH with some arm-side run and signs of command to both sides of the strike zone. Morgan had a lot of confidence in his sharp, hard 82 MPH slider that created some whiffs, showed a promising changeup and also threw a curveball at 76 MPH that flashed once or twice and looked like a slurve other times. I liked the way the arm/shoulder worked and there are some physical gifts Morgan possesses that suggest there’s more in the tank. Major D1 prospect.

Left-handed hitter Ryley Leininger, a third baseman from 5A state champion Georgetown, had some of the quickest hands and best bat speed in the event, which translated to a .364/.417/.545 slash line. Leininger looked like he wouldn’t have issues timing good fastballs and if he can get to breaking stuff consistently, he could emerge as one of the top hitters in his class.

The catching duo of Gavin McCullough (.500/.600/.625) and Charles Evans (.222/.300/.222; five RBI in 10 plate appearances) took pride in their work defensively and impact on their team with their voices and body language. Both guys looked like they loved baseball and competing on both sides of the ball.

Left-handed hitter Angel Gutierrez (Hightower) used impressive bat control and let the ball travel well before consistently smacking liners around the diamond. Speaking of letting the ball travel, teammate and Magnolia corner infielder Jack Hubble walked seven times with just one strikeout. It was an impressive feat because Hubble was unafraid to unleash an aggressive swing when he saw something he wanted to attack.

George Ranch left-handed hitter Lane Walton was a standout with the bat, using a short, picturesque swing to finish with a 1.127 OPS. Patrick Lewis showed a quick, loose arm on the mound with notable physical projection and punched out nine across 5.0 shutout innings. A two-way talent, Lewis’ hands worked naturally and quickly in the batter’s box.

– Statistically, Clear Falls and C2 Baseball Blue shortstop Chile Timmons didn’t stand out, but he has some ‘it’ about him and showed some intriguing tools, especially defensively. Teammate and LaPorte prospect Landon Kay did have the standout statistics to support an athletic swing with quick hands. Kay, who ran 4.47 seconds from home to first on a big turn, hit .375/.615/.875 and created some surprising juice (drilled a homer) from a small frame. He bounced around the diamond with twitchy, athletic movements.

– Like Timmons, NTXBC Dirtbags – 2024 Allerheiligen Navy shortstop and switch-hitter Ryley Chapman didn’t post the loud statistics he hoped for, but he had interesting all-around tools. Teammate and left-handed hitter Peyton Tatum (Grapevine) was consistently productive and in the at-bats I saw, he moved very well with a simple, productive, athletic swing.

Alex Luna (Timber Creek) is an interesting player, and will be even more interesting when he adds strength to his small frame that has some length. Luna’s right-handed swing handled pitches up and down and he ran really well.

– Clutch Sports Academy – Scout 2024 right-handed hitter Sam Coleman (All Saints Episcopal) hit for the cycle and did it in style with a majestic homer. Coleman profiles as a future physical power hitter who is already adding leverage to his swing and unleashing good bat speed.

CYCLE✅@ClutchSportsTX Scout 2024’s Sam Coleman (@samcoleman2024) put together quite the day at the dish and drove the ball all over the yard on his way to a cycle. #DudeAlert #FiveToolHitting

In addition to having one of the best names in the event, teammate Hawk Bowers (Guyer) was one of my favorite right-handed hitters to watch and created more juice than his thin, medium frame would suggest. He’s one to follow.

– Tall, thin, left-handed strike-throwing machine Kai Bumpas (Wakeland) gave up just one run across 6.0 innings and struck out 13. He mixed speeds well, moved his stuff around the zone, and projects to fill out physically. Texas Cannons 2024 Rumfield teammate and right-handed hitter Hector Aguilar, Jr. used an all-fields approach and showed he could catch the ball out in front to pull it or let it travel a little deeper to go the other way.