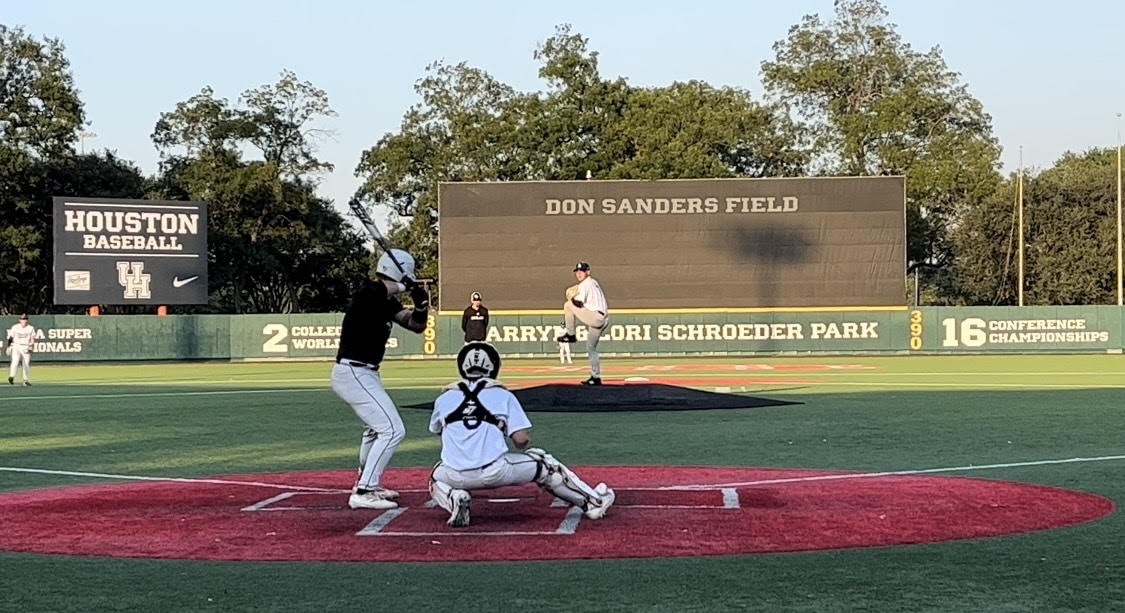 I would like to say this game, which took place at the University of Houston last Tuesday, was dominated by excellent pitching, but that would be a lazy way to explain a game that included so few hits and runs. Sure, there was some quality pitching and strong stuff on both sides, which you’ll notice in the upcoming notes session filled with more pitching mentions than hitting. But if you asked me to use just one word to describe the Dodgers Scout Team versus San Jacinto College, I’d respond with, “blah,” especially when compared to the Blue Jays Scout Team versus Weatherford College the next night at Dallas Baptist University.

Harsh for a fall scrimmage? Probably. After all, it is… a fall scrimmage that doesn’t count for anything, although you’d think with pro scouts in attendance the juice would run a little higher. Were there several standouts? Of course. Let’s talk about them:

(Thanks to the University of Houston for publishing Trackman data on the scoreboard. And also it should be noted the Dodgers team was much better last night at Texas A&M against Galveston College.)

Hayden Morris (@HaydenM2023) had the hook working vs. San Jacinto yesterday. FB command was spotty, but showed he can pitch with CB early/late in counts.

Although he touched 92 MPH with a fastball that had around 2200-2400 RPM, Morris saw some fastballs miss up and to the arm side (tendency to get offline with his torso/shoulders and search for velocity by opening up early) and it didn’t have the type of jump and sizzle through the zone its velocity and RPM would suggest. He’d probably benefit from a more consistent hand finish or perhaps a grip change because he’s going to throw harder in the future and can clearly spin the baseball well, relatively speaking. As for the curveball, it was hammer time. Yeah, I’m not apologizing for that line.

Anyway, the 80-82 MPH power hook with 12-6 break showed swing-and-miss bite towards the turf when it started near the heart of the zone and the ability to buckle a right-handed hitter when it started up in the zone. The curveball had around 2300 RPM and its efficient spin helped really frustrate hitters. Once he realized hitters were having a very tough time with the pitch, Morris didn’t hesitate to confidently use it early and often. In a more extended look, we probably would have seen the splitter against lefties, which 85 MPH in warmups and had a true splitter look.

Each time I see La Porte right-handed pitcher Diego Luzardo I become a bigger fan. The Houston commitment might have the best combination of control and command in the 2023 class and his stuff is trending up, too. When the righty misses, the misses are often near the intended spot and not by much. There’s a lot to like about Luzardo’s shoulder, arm and elbow movements in his delivery and he’s a good athlete with no issues holding his stuff deep into games.

Continue to be impressed by Diego Luzardo (@Diego_Luzardo18). When he misses, it’s not by much. Can really pitch & really spin the baseball.

Against San Jacinto, Luzardo’s fastball sat at 89-92 MPH with spin rates consistently in the 2300-2400 range and the occasional late sink when his arm slot/hand placement dipped. The heater is capable of beating hitters and especially works well with his slider, which he featured more often than his curveball because he had better feel for it that day. The breaking ball with noticeable sweep occasionally had spin rates just above 2700 RPM at 76-79 MPH, showcasing Luzardo’s ability to spin the baseball and manipulate his breaking stuff. Although he didn’t use it a lot, his changeup stood out, too. Luzardo holds it like a circle changeup but the way it comes out of his hand creates a splitter-like late tumble around 81-84 MPH.

He gave up the only runs scored in the entire game, but I came away impressed with Hudson Hamilton’s stuff and strike-throwing. The changeup is a work in progress and he does tip the pitch occasionally with his shoulder, arm slot and hand speed. That said, the Oak Ridge right-hander touched 93 MPH with his fastball and his slider sat 79-82 MPH with around 2500-2600 RPM. Hamilton, a Texas commitment, occasionally caught too much of the heart of the plate, but showed a future strike-throwing starter profile with command that will be better in the future.

On the hitting side for the Dodgers, there isn’t much to talk about. But there was one clear standout: Cypress Woods outfielder and TCU commitment Sam Myers. The left-handed hitter steps into the batter’s box confidently, tracks pitches well and is emerging as one of the best pure hitters in the 2023 class. In his first at-bat, Myers lined a 92 MPH fastball on the outer half right at the third baseman and later in the game, he stayed on time against a changeup and hit a very hard grounder right at the first baseman. Defensively, Myers looks like he has a real chance to stick in center field and play the position at an average or better level and has an above average arm, too. See him on the right day, and the run times could be plus, which show in the outfield as he covers ground well.

To say it was a quiet night with bats for Dodgers Scout Team is an understatement, but Sam Myers (@_sammyers13) easily took best swings. @TCU_Baseball commit and ‘23 @CWCatsBaseball OF was 🔒 in. Didn’t have anything to show for very hard contact. @FiveToolTexas pic.twitter.com/OHQlpKlAbB

Additionally, Nehomar Ochoa, Jr. (Galena Park) and Jaquae Stewart (Sinton) took good, aggressive swings, just missing several pitches. The former spoiled changeups and breaking balls multiple times and the latter showed good strike zone awareness, which resulted in two walks. He had a quiet day at the plate, but Tristan Russell ran 4.28 seconds down the line, from the left side, on a routine comebacker. Garet Boehm recognized spin well and was part of the coolest moment of the night. He faced older brother, San Jacinto right-handed pitcher Gage Boehm, in the final at-bat of the night. Against a 95 MPH heater, little brother hit a 94 MPH groundout at the second baseman.

Here’s every pitch Gage threw (I liked the splitter but only saw it in warmups). ⬇️ @FiveToolJUCO pic.twitter.com/1b7bmI1QHa

As for the older Boehm, he ran his fastball up to 96 MPH with some natural downward life, showed an inconsistent curveball that should show an overhand look when it comes out of the hand well and an intriguing splitter. An imposing presence with a big chest, it’ll be interesting to see if Boehm profiles as a starter or more of a backend bullpen arm for San Jacinto.

Best fastball of the night courtesy of skinny, long, 6-2 🇵🇷 @SJGator_BB RHP Jean Paul Ramos. As you can see, he racked up the whiffs with a heater that jumped on hitters (T93 MPH) out of a quick arm. Also showed intriguing cutter feel and CH with arm-side fade. @FiveToolJUCO pic.twitter.com/fX8OL7178Q

I think the same description could be used for freshman Jean Paul Ramos, a very skinny, 6-2 right-handed pitcher from Puerto Rico. With the best fastball of the evening, the San Jacinto righty racked up whiffs in a very impressive appearance on the mound. Ramos’ length doesn’t negatively impact his arm speed, which was impressive; couple that with some late hand separation and positioning that offered a bit of deception and a 91-93 MPH fastball played like it was 94-97 MPH.

Ramos also showed a slider at 82-84 during the game but threw one 87 MPH in warmups with more of a cutter look. His firm changeup had noticeable arm side fade. He’s a really interesting prospect because there’s a lot of development that can occur in the delivery (like how he lands) to help improve his strike-throwing and the possibility he could be a starter.

There’s no doubt right-hander Lex Garcia is a starter. I think he’s going to be a strike-thrower with four pitches (fastball, curveball, slider, changeup) out of an easy, repeatable delivery and he showed a true feel for being able to pitch, like executing, to his glove side, his 80-82 MPH slider (2200-2400 RPM) against right-handers, spinning a 78 MPH hook against righties and moving his fastball (89-92 MPH) around the zone. Garcia’s changeup flashed against lefties as a future plus offering at 81 MPH with as low as 1600 RPM.

On the hitting side, I left a huge fan of Elijah Dukes, Jr. A left-handed first baseman who is undoubtedly a bat-first prospect, Dukes showed an advanced feel for hitting, and tracking pitches out of the hand; he’s one of those hitters who shows you something even when he takes pitches. He just missed a homer with a 101 MPH blast off the bat and is a good bet to lead San Jacinto in batting average, on base percentage and slugging.

I also left a fan of freshman catcher Jose Torres, who played defense with confident, infectious energy and caught a runner stealing second with a 1.98 pop time. Torres showed some promise at the plate, too, and looks like a strong bet to be a D1 catcher and a prospect scouts track in the spring.