In a few weeks, the MLB Draft will arrive. Not long ago, the Texas high school baseball season concluded with its annual THSBCA All-Star Games. So, it’s time to put my pencil (mouse) down and take the final 2022 Five Tool 55 to print.

Before we get to the list itself, some useful background reading:

WHO WOULD HAVE BEEN NO. 56? PLAYERS WHO JUST MISSED THE CUT

It’s been a very fun process, but also challenging, too. I’m not breaking any news here to share this: Texas is a gigantic state that a ton of outstanding baseball players call home. So, coming up with a list of the top 55 players/prospects in Texas is a challenge. Make no mistake, it’s fun and one of the reasons why I joined Five Tool. But it’s challenging because what comes with ranking players is a responsibility to do it the right way. And we believe the right way is seeing as many players as we realistically can without our wives leaving us.

Each player ranked was seen in person by Drew Bishop, myself or both of us during the 2021 summer when we first joined Five Tool, the 2021 fall, and the 2022 high school season. We take immense pride in that. We also don’t pretend we’re suddenly a gift to the Baseball Gods as legendary evaluators, although we have confidence in what we’re seeing, backed by things like attending scout school, being an associate scout, interviewing with pro teams and spending over a decade seeing what works and doesn’t work at the highest level of college baseball.

That said, we do crosscheck our evaluations and seek knowledge of what the industry (professional scouts, college coaches, etc.) thinks. It would be silly not to. Those thoughts are blended with our own and are a part of the rankings process, which means there is an element of reporting involved. (If you want to read more about the process, click HERE.) Alright, enough typing. Here’s the third and final update of the 2022 Five Tool 55 for the state of Texas: 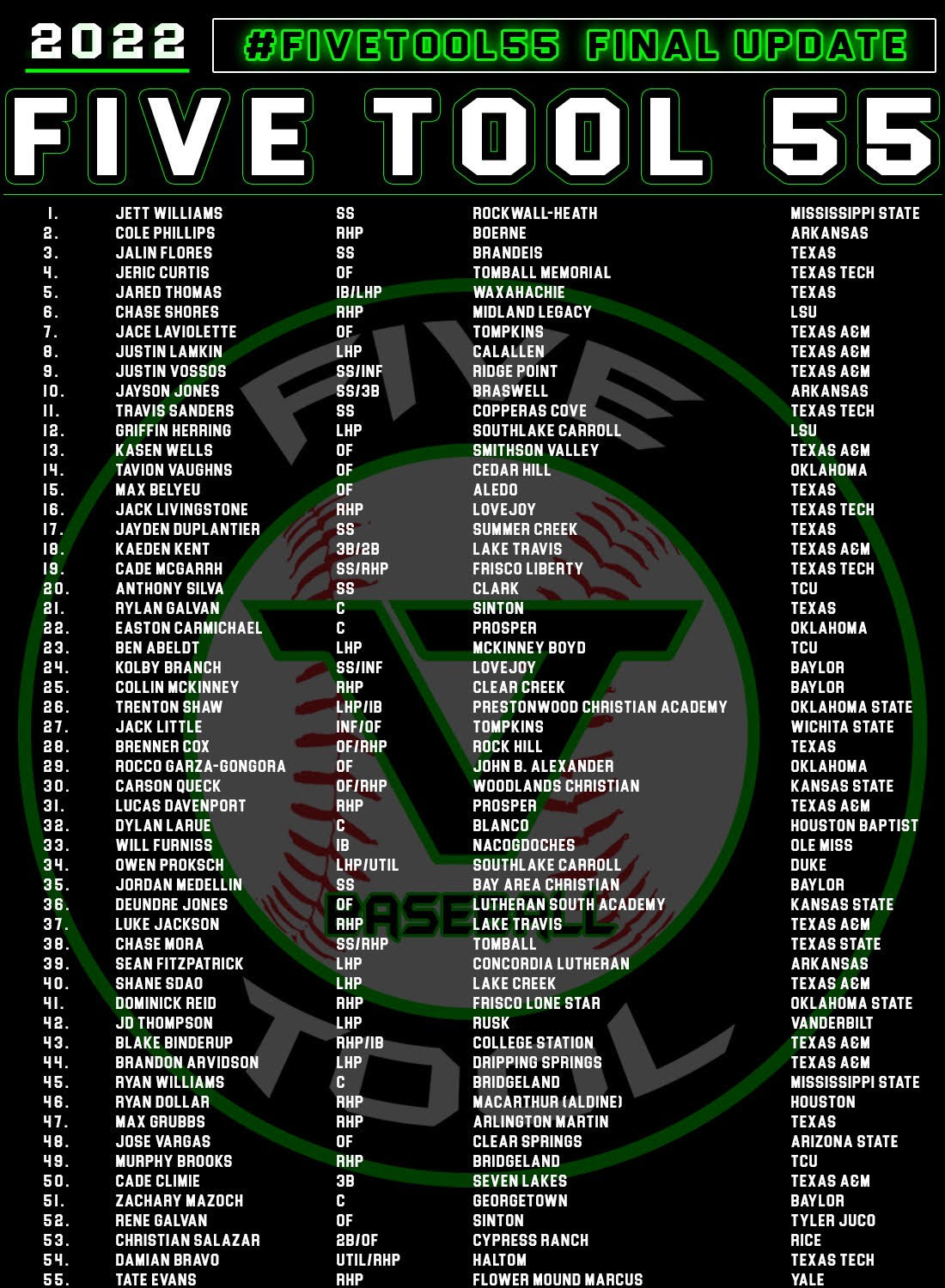 – As a scout I really respect told me, the goal is to get it right in the end. I think we did that with Griffin Herring. A longtime LSU commitment who has a track record of performing in high school and on the summer circuit, Herring’s stuff was ahead of his peers early in his career and, for lack of a better word, stagnated. He’s always been a Five Tool 55 member. So, it’s not like he hasn’t been one of the best pitchers in the state and nation, but I wanted to see a little more. Herring delivered.

Not only did his stuff tick up considerably (the slider I saw in the THSBCA All-star Game was a plus, maybe plus-plus pitch), his performance was sensational. He carried a 55.2-inning scoreless streak into the 6A state semifinal game where he finally gave up a run against one of the best lineups in the state… while also punching out 13 and dominating in a victory. The physical lefty finished the season with a 0.24 ERA across 87.0 innings with a 0.85 WHIP, 144 strikeouts, just 30 hits and 44 walks. I’d be lying if I said the walk total wasn’t a tad worrisome, but the look I saw included some fastball command and control of all his stuff.

He’s capable of showing up to LSU and contributing immediately, assuming he gets there because there is some MLB Draft helium attached to his name.

– Each time I saw Sinton catcher Rylan Galvan his bat stood out loudly and his catching skill grew on me; it helps that he has a strong arm behind home plate. Projecting prep catchers remains the most difficult thing an evaluator will do, but the worst case for Galvan is he moves off the position with a strong bat and enough athleticism to play defense somewhere.

– Rockwall-Heath infielder Jett Williams went wire-to-wire as our No. 1 prospect. It became obvious coming out of the summer Williams had one of the best hit tools among high school prospects, packed a surprising amount of pop given his short stature and was able to shine on the biggest stages against the toughest competition.

And there goes JETT!

Jett Williams (@jettwilliams04) ties this game in the top of the 6th with the RBI triple to center. Only a matter of time until he was going to make a big impact. #FiveToolSpeed@HeathHawksBB (TX) 2022 · @HailStateBB signee pic.twitter.com/Grwl4qTlLf

It would be a shock if Williams isn’t a first-round selection in the upcoming MLB Draft, and I think he could go within the top 15 picks. In addition to his standout hit tool, Williams showed improved run times in the plus-plus range; played shortstop with notable athleticism, actions and hands and has a chance (I admit I’m more bullish on this than some pro evaluators) to stick there as a pro (people forget he threw in the low 90s as a pitcher); earned rave reviews behind the scenes for his leadership and makeup; and proved his instincts and speed can impact the game on both sides.

From our first look at Cole Phillips (@Cole_Phillips_) to now!

Perhaps Boerne right-hander Cole Phillips, No. 2 on our list, could have challenged Williams for top honors if he didn’t injure his elbow and require Tommy John surgery. But that would have taken a Herculean-like year because I believe Williams has four future tools that are above-average or better, confidence he’ll get the most out of his talent and his power could flirt with being average on the scouting scale.

– I think there’s a decent-or-better chance both Jalin Flores and Jeric Curtis are selected in the second round of the upcoming draft if both are viewed as signable. Curtis, an outfielder from Tomball Memorial with legendary speed, improved as much or more than anyone in the state from last summer until now, and was head-and-shoulders better than everyone on the field during one of the Dodgers Scout Team games in the fall. I believe in the quick, strong hands and hit tool, although it does, along with the defense, require some aggressive projection. He’s a great athlete who has improved rapidly and betting on those guys is smart.

As for Flores, he possesses a unique smoothness to his game. Everything seemingly comes easy to him on the diamond and he floats around with the type of frame that immediately stands out as a future pro. I’m more bullish on his possibility to stick at shortstop long-term than some scouts are, but it is rare for a player of his height and length – he’s listed at 6-2 but I think he might be 6-3 and isn’t done growing – to be able to stick there as a pro. Regardless, his knack for making contact, actions defensively and intangibles have always stood out and as he matures and fills out, the power, with the help from some hitting tweaks (better control of the long levers, hitting the baseball deeper in the zone), will come.

– The top four comprises a tier of clear MLB Draft prospects and the next 10 or so players could be draft guys, but probably have price tags higher than what the industry would pay. It’s a list of players I really like who would all be candidates to thrive in college and emerge as top picks. Ranking Waxahachie two-way talent and awesome left-handed hitter Jared Thomas as high as we continuously have might stick out, but I’ll bet on his natural hitting feel and left-handed swing more than any other left-handed hit tool in the class. His intangibles help that, too. And I think he can play in the outfield at at least an average level.

(Note: a few guys in this range are covered in the columns of additional coverage listed above)

– Moving down the list into the Jayden Duplantier range, it’s going to be fun to track the shortstops, catchers and toolsy outfielders because I think that’s where we differ a little with the industry. And because it was hard to create separation and rank those players. If there was a guy who improved as much as Curtis did over the last calendar year, it’s Summer Creek shortstop and future Texas Longhorn Jayden Duplantier. I saw him run 3.9 seconds from home to first and he plays the game with infectious energy. My last look at him included turning around a 91 MPH fastball and hammering a double down the left field line. I know he’ll put in the work to improve all around and can stick at short in college if the consistently and skill continue to improve.

Get the ⏱ out for @TexasBaseball signee and @SCHS_Baseball1 SS Jayden Duplantier (@jduplantier88). Beat out this grounder for a single thanks to 3.96 down the line 💨. #HookEm @FiveToolTexas pic.twitter.com/wsiKgKaEGh

As for Kaeden Kent, another guy we’re higher on, I’m willing to bet on sons of former MVP winners who repeatedly hit every time I see them. Kent hit all summer and all throughout the high school season, and once he crosses those white lines, he has a unique, fiery competitiveness.

After seeing @LTCavBaseball SS and @AggieBaseball signee Kaeden Kent again Saturday, I remain convinced he’s going to reach the bigs. Got unintentionally buzzed first AB, then smashed a triple. Looked a tad taller. One of my favorite LHH in ‘22 class. @FiveToolSTX #GigEm pic.twitter.com/EJBQGCZ7LD

– We’re big believers in production, which is reflected in our rankings of Griffin Herring, Owen Proksch, Tate Evans, Jack Livingstone, and others. Production, especially at the highest level of high school baseball, should be rewarded and will always be a part of our process. Yes, the tools and scouting will always matter most, but what good are tools if a player can’t utilize them at the high school level?

– Thanks for following our coverage. We anticipate there will be absolutely no disagreement with anything on this list (sarcasm in there in case you didn’t pick up on it… disagreement is natural and comes with the territory). Hopefully, providing some transparency and explanation for why the list is what it is helps readers process the rankings.