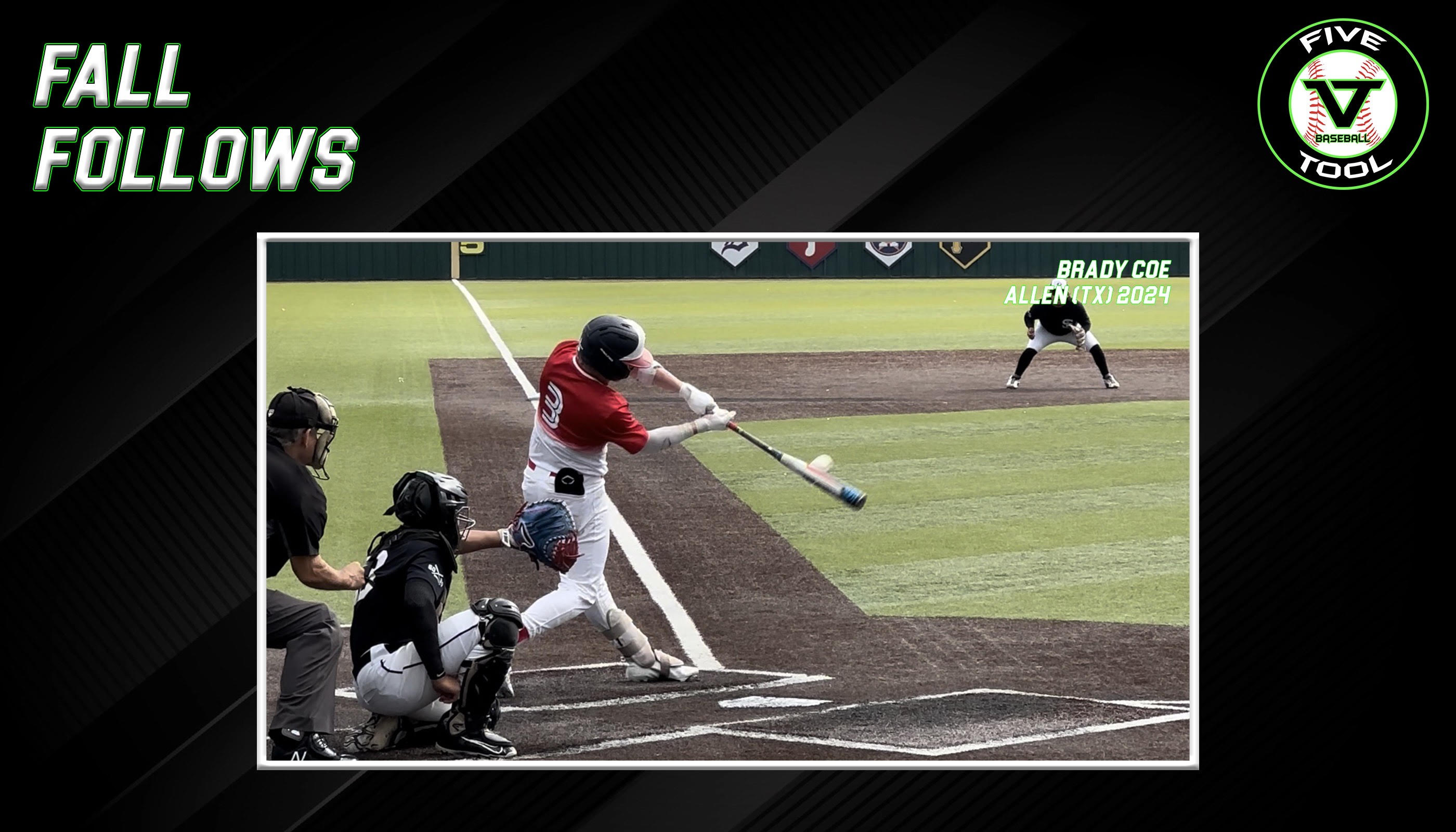 The fall season is coming to a close. After releasing our updated 2023 Five Tool 55, we’ve spent the last month evaluating, researching and crafting an outline for our first 2024 Five Tool 55, which will be released before the end of 2022. We’ll evaluate well over 200 prospects while putting together our inaugural list for the 2024 class, which means any fall look is fresh on our minds.

But we also pay attention to standouts in other competitive arenas, too. And Texas is filled with baseball standouts who also star under Friday night lights. Some uncommitted 2024 players who caught our eye this fall on the baseball or football field:

Coe can do it all. The uncommitted 2024 prospect followed a strong summer with an excellent fall and is one of the most skilled baseball junkies in the class. His love for the game and competing is evident and he never looks overwhelmed. In some of his final games of the fall, you could find Coe making impressive plays at shortstop, striking out seven guys in 4.0 innings, and smashing extra-base hits.

.@DFWTwins 17U Black’s Brady Coe (@bradycoe6) laces a ball the other way for the RBI double.

With a fastball we’ve seen up to 87 MPH and an intriguing feel for a swing-and-miss breaking ball, Coe should be on the D1 radar as a pitcher, especially considering his strike-throwing ability. But he’s a true two-way talent who might be a better hitter than a pitcher and has already proven capable of playing third base, shortstop and second base. Basically, he’s a really good ballplayer in the truest sense of the word.

.@DFWTwins 17U Black’s Brady Coe (@bradycoe6) was lights out in his outing on the bump this morning. The RHP struck out 7 in 4 scoreless innings while only surrendering 2 hits.

McCoy caught my attention during the Five Tool and Texas Scouts Association event this September when he showed exciting upside, athleticism, skill and instincts while playing for the Arlington A’s. The uncommitted 2024 prospect glides around the field with a twitchy bounce to his step and his short swing gets through the zone with some dangerous intent. It was a very limited look, but McCoy looked like he had a chance to stick at shortstop long-term and his physical upside is an easy bet to make.

.@arlingtonas1988 Yankees’ Cohl McCoy (@MccoyCohl) gives his squad the lead with the RBI single in the top of the 7th.

After a phenomenal performance at the Mickey Mantle World Series this summer, Lunsford, a legitimate switch-hitter, showed up to the United Baseball Club Scout Day and ran a 6.41 60-yard dash. Okay. Maybe there was a little bit of a friendly stopwatch. Regardless, Lunsford can fly with plus wheels, present strength and impressive athleticism. His right-handed swing kind of gives me Ethan Mendoza vibes and his left-handed swing has already pulled some homers.

.@UnitedBC_USA Texas Jones’ Reece Lunsford (@ReeceLunsford) continues to slug with the leadoff triple towards the right-center gap from the right side. #FiveToolHitting

Sweet stroke! 🍬@UnitedBC_USA Texas Jones’ Reece Lunsford (@ReeceLunsford) shows his power from the left side blasting this one for the solo home run and his 3rd hit of the game at the #MantleWS. #FiveToolPower #DudeAlert

If he wasn’t already, Lunsford should be on D1 coaching radars.

Selected to the USA Baseball 2023 17U National Team Development Program, Johnson spent his late summer/fall touching 90 MPH at various college camps. The big, 6-5 righty with an imposing presence on the mound first caught our eye during the Pudge Rodriguez World Classic. Pitching for the Waco Storm, this was our report from the summer:

“Midway 2024 right-hander Cameron Johnson fed opposing hitters some bowling balls for breakfast. Imagine waking up early, getting to the park around 8:00 a.m. and then facing a big, physical, 6-5 righty firing very heavy sinkers up to 87 MPH. Doesn’t sound like fun. Johnson also showed an interesting slider up to 78 MPH that really flashed when it was snapped off with tighter spin and shorter shape compared to other times when it looked more like a slurve.

Still growing into his body and understanding how it works on the mound, Johnson held his stuff, showed a changeup and is going to throw harder in the future; perhaps much harder because of the way his arm worked and his lead leg strength supported his big frame.”

.@wacostorm 16U Astros’ Cameron Johnson (@CameronJ3133) was dialed in for his outing at the @FiveToolTexas 2024 State Championships. The RHP tossed a complete game shutout while only allowing 2 hits on 8K.

This fall has proven Johnson remains on track. He’s throwing harder. He’s finding more consistency. And he remains a very intriguing right-handed pitcher who possesses upside because of his strength, physical outlook, and simple delivery and the opportunity to leverage more of his physical gifts at the next level.

Polydoroff is proving to be the type of player whose bat doesn’t take games off. After emerging as a force for one of 6A’s best teams last season, the physical right-handed hitter kept hitting in the summer and again during the fall. Put him in any lineup, and he hits. It’s a bat-first profile, but don’t be surprised if he is one of the state’s most productive hitters during 2023.

Many players don’t play baseball during the fall or only play very little because they’re doing what so many teenagers do in Texas – play under Friday night lights. I’m a firm believer that football players, and other multi-sport athletes, show us who they are or can be as baseball players by what they do with their helmet and shoulder pads on; it’s a different type of competitiveness, skill and athleticism, but it’s a type that can translate to makeup, movement and production on the baseball diamond.

Some 2024 baseball prospects who grabbed my attention with their football performances:

Leon, who balanced snagging and throwing passes for Lake Travis this summer with some hitting and pitching, isn’t making headlines this fall because of his work on the diamond. Rather, he was unexpectedly, following an injury, tasked with being QB1 at Lake Travis, a prestigious opportunity, while Bo Edmundson recovered from an injury. He responded by showing his outstanding, multi-sport athleticism, leadership and competitiveness.

Facing a 3rd and long at the edge of the red zone, Lake Travis punches it into the end zone on the game’s opening drive

Cavs take a 7-0 lead on Austin Westlake with 6:35 left in Q1 #txhsfb pic.twitter.com/wTRmlStNBf

My look at him last spring was very limited, but he showed similar stuff and upside this summer and remains one of the 2024 pitchers with the most potential in Texas.

.@positivebasebal 16U’s Kadyn Leon (@LeonKadyn) looked great to close things out in his outing at the @FiveToolSTX WS Qualifier. The RHP picked up 2K in 1 IP allowing no hits.

Regala might be the fastest 2024 prospect I saw all summer. So, it’s unsurprising to see he’s also a big-time playmaker on both sides of the ball for Wylie and runs track, too. Being in the heart of the action on the gridiron is familiar for Regala who clearly has a knack for playmaking, competing and his all-around instincts shine.

KTXS Player of the Week

Wylie's Braden Regala had 200+ receiving yards, 2 TDs and the game-sealing INT to come back on Wichita Falls Rider.

His outstanding athleticism makes him one of the top football players in his region and also shows defensively in center field, on the bases and in the batter’s box. A skilled switch-hitter, Regala packs some punch despite his short stature and has really exciting tools.

Bang! 💥@TxAngelsBB 2024 Libson’s Braden Regala (@BradenRegala27) gets this one started early with the solo home run crashing off the scoreboard here in the 1st. #FiveToolPower

A three-sport standout who catches passes for the football team, is a member of the 4×100 relay team and plays baseball, Miller has shown on the football field this fall his straight-line speed, especially for his size, and athleticism are really impressive. As his baseball reps continue to increase, his skill should begin to catch up to his outstanding athleticism.

Already receiving power-five football offers, it’s likely Adams is destined for a college career as a quarterback. He’s a dual-threat playmaker who shows impressive feel in the pocket and for understanding where to keep his eyes on the field and when to tuck and run. Adams makes bouncing around the pocket and delivering dimes or escaping defenders look smooth. And he wins, too.

A talented shortstop with a strong, loose arm, Adams is no slouch as a baseball prospect and has the ingredients to become a D1 target in that arena, too.

Deuce Adams (@AdamsDeuce) finds the hole on the left side for an RBI single. @CanyonCougarBB (TX) 2024 #uncommitted pic.twitter.com/kfgbJsE0Ux

Deuce is the son of former Texas great Mike Adams, one of the most decorated receivers in Longhorn history and a seventh-round selection by the Pittsburgh Steelers who saw his career cut short by a knee injury suffered during his rookie season. Now, Adams coaches receivers and is the passing game coordinator at Canyon. He dials up plays for one son, Deuce, to throw it to his brother, Eli. Eli also plays baseball for Canyon and is one of the top receivers in the region.

Keeping with the theme of “sons of former Longhorn standouts, Turner Murdock emerged as one of the top quarterbacks in Houston when he led Second Baptist to a state title game appearance last year. His father, Mark, played quarterback at Texas and his mom, Jenny, was a champion golfer at Texas and played in the LPGA Tour. So, standout athletic skill absolutely runs in the family and at 6-2 with a strong arm and touch, Murdock is a true two-sport standout. He’s also a smart QB because he routinely throws the ball to JD Crisp.

I know, I know… it’s a scrimmage, but this is a pretty throw and catch 👀

Crisp’s athleticism and physicality stick out on the diamond. On the football field, he’s a do-it-all weapon on offense who is very difficult to tackle. He lines up as a ‘Wildcat’ QB, at receiver, at running back and he’d probably drive the team bus if they asked him.

Murdock and Crisp weren’t going to be denied a state title in baseball. The duo helped lead Second Baptist to a title in 2022 and will have a great shot to back back-to-back in 2023. Crisp’s profile as a baseball is more defined – he’s a physical switch-hitting outfielder with developing power who can run, throw and should continue to improve his skill with more reps.

Meanwhile, Murdock can pitch, swings it well from the left side and probably profiles best as a corner infielder when he’s not on the mound. But after missing the summer with a dislocated kneecap, college coaches will be anxious to sneak in a spring look before an important summer.

Cam Harris coming off the edge isn’t a fun vision for offensive tackles and quarterbacks. The two-sport standout finished the regular season with 14 sacks and is a key piece for one of the state’s best teams.

On the diamond, Harris’ physicality, strength and athleticism show. On the mound as a right-handed pitcher, his velocity began to take off as the summer ended.

And he uses his impressive strength to pack a punch in the batter’s box with noteworthy bat speed and impressive fluidity for a young, muscular player who certainly looks the part of a 3-4 linebacker. Harris will end up being a four-year varsity contributor when he graduates in 2024 after emerging as the Freshman of the Year in his district during the 2021 season.

Hutcheson’s left-handed swing, pitch recognition and movements in the outfield caught my eye during the Pudge Rodriguez World Classic. He’s a little bit ahead of most peers when it comes to strength and physical maturity, but he’s also ahead in understanding how to utilize it on the diamond. I won’t be surprised if he’s one of the best hitters in his region this upcoming season.

.@LBKBaseballAcad Deck’s Landon Hutcheson (@LandonHutcheso5) rockets this ball to the wall in right for an RBI double.