#DudeWatch is back. The purpose? To shine a brighter light on a few uncommitted 2023 prospects we think colleges should take a closer look at. This edition again includes a talented right-handed pitcher from Round Rock, a couple of two-sport standouts, an excellent student coming off a very productive summer on the mound and more. 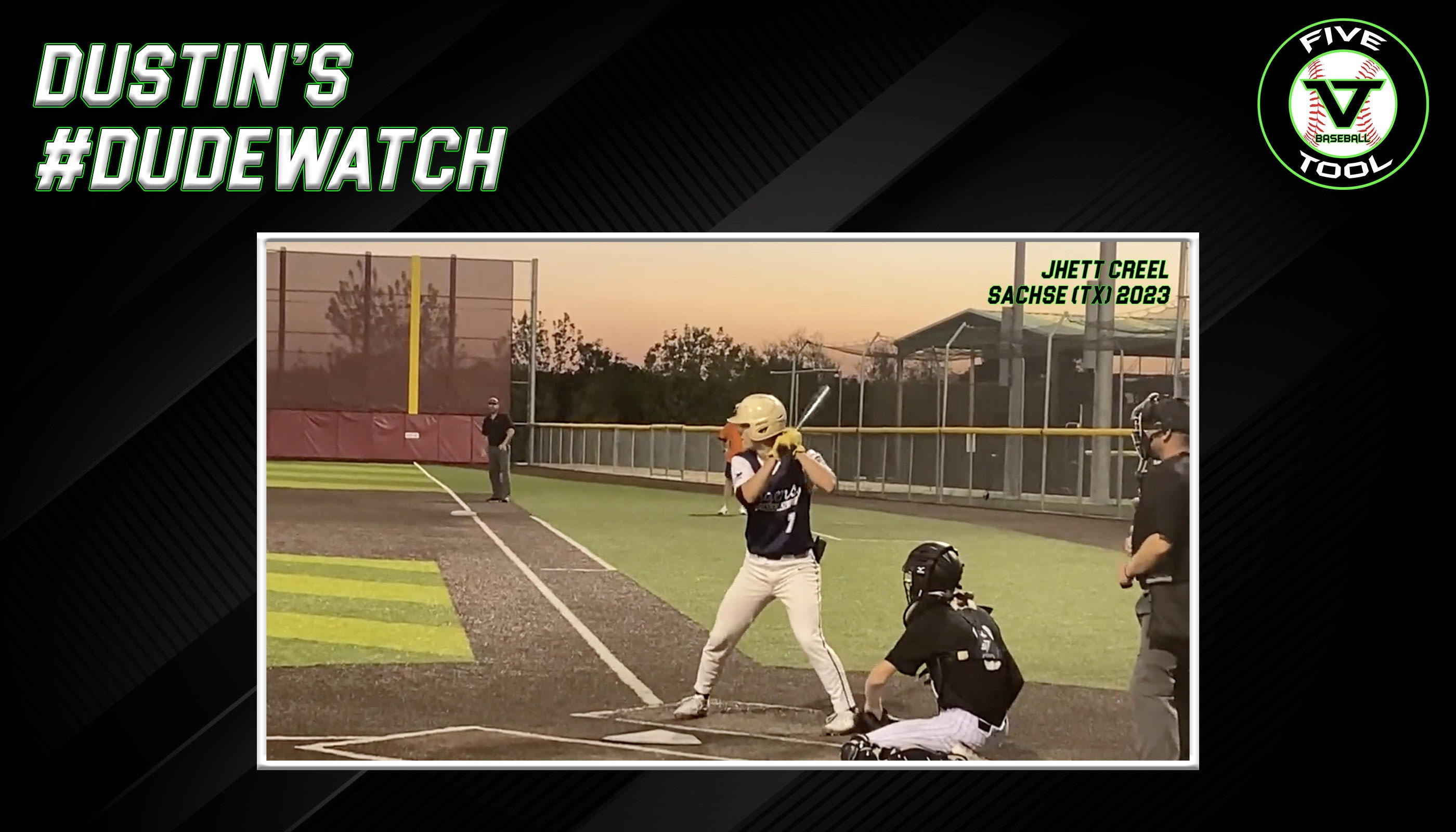 Last week’s #DudeWatch included Round Rock right-handed pitcher and Five Tool Academic Team standout Tanner Jackson. He then committed to Temple College. Cade Waibel should soon find a collegiate home, too. Along with Jackson and Travis Sykora, who is No. 2 in the updated 2023 Five Tool 55, Waibel should help Round Rock form one of the top pitching staffs in the region and perhaps among all 5A teams. Here’s our report from his outing in the AABC Don Mattingly World Series:

Nasty.@GPSTEXASBASEBA1 17U Puffer RHP Cade Waibel (@CadeWaibel) showcased some big time stuff in the #MattinglyWS. Picked up 6K in 5 IP and allowed one hit.

“Waibel didn’t pitch much for Round Rock last season, but that should change in 2023. At foot plant, the uncommitted right-hander showed a lot of hip-shoulder separation, among a few reasons why he’s already throwing 90 MPH and has room for more. He also keeps his back foot on the rubber through release and rotates his shoulder well with a lot of “layback” present as his arm gears up for release. As Waibel adds strength, fills out – he has the kind of thin, 6-2 build that results in his jersey flapping around during gusts of wind – and gains a better understanding of how to repeat and become efficient on the mound, I’d be surprised if he doesn’t throw noticeably harder in the future.

Waibel created some uncomfortable looks for right-handed hitters, which included breaking a bat with a hard fastball, with his sidearm slot; it was one of those stuff profiles featuring a hard fastball that could run to the arm side on occasion with a 71-73 MPH slider that moved the opposite direction. In 5.0 innings, he gave up just one hit, walked two, and struck out six. Waibel also hit two batters and keeping his delivery and body in sync is the next step to unlock some more control.”

Don’t let the lower arm slot fool you because this is a quick arm with more in the tank. At the next level, he could provide immediate impact out of the bullpen because it’s a unique, tough look on right-handed hitters and he’d be able to fill both an extended relief role and the traditional one-inning appearance.

There’s a lot to like about Morio: projection, athleticism, outstanding grades, fastball that plays up and will add velocity, easy and repeatable delivery, promising changeup, and a chance to develop a more consistent breaking ball. Our report from his dominant performance in the Five Tool World Series:

Rack ‘em up!👊@ActionBaseball 17U White’s James Morio (@James_Morio11) threw a gem at the #FiveToolWS. The LHP attacked hitters the entire game picking up a mind-blowing 13K in 5 IP allowing 0R on 1H.

“The most impressive pitching performance of the Five Tool World Series, at least among outings I saw, came courtesy of uncommitted lefty James Morio (McNeil). With an explosive fastball up to 88 MPH that often played above its radar gun reading, Morio punched out 13 batters across 5.0 scoreless frames and gave up just one hit against a talented Dallas Patriots lineup. Of his secondary offerings, Morio’s changeup (77-80 MPH) was the best and featured fastball conviction and some late tumble. As for the breaking stuff, his curveball (70-71 MPH) occasionally flashed with promising, true shape and was his best breaking ball because his harder slider (74-75 MPH) didn’t come out of the hand as cleanly. Regardless, the lefty possessed the makings of a four-pitch mix.

At 6-2, 160 pounds, the impressive athlete with physical projection remaining, who is a Black Belt in Tang-Soo Do, is absolutely worth betting on, should throw strikes routinely and should have future average or better command with three promising offerings and a slider that could make a jump. Additionally, Morio has a 5.32 GPA, is a two-time Academic All-District selection and his twin brother, Brandon, is talented on the mound, too.”

I envision Morio filling a starter’s workload at the next level and probably for multiple seasons.

A two-sport standout who plays a key role for Barbers Hill’s defense on Friday night, Van’s athleticism and arm speed on the mound stood out this summer during the AABC Don Mattingly World Series:

“Because of the way his arm worked, I think Briley Van has a chance to throw very hard in the future and he touched 90 MPH while sitting comfortably in the 86-88 MPH range. The athletic righty who has present strength accompanying an athletic, football player-like frame, flashed one of the best sliders in the event at 76-77 MPH. As Van likely adds more velocity in the future, the fastball shape could improve because the pitch looked more hittable than it should have been.”

Here is a quick look at @MarucciEliteTX Thames’ Briley Van (@BrileyVan3). The RHP turned in a solid 3.1 inning outing and picked up 7K along the way.

With improved fastball shape, Van could become an impact reliever for a program because the slider flashed as a potential bat-missing pitch this summer and there’s strength, athleticism and arm speed to tap into to add more velocity to the heater. That said, his strength and athleticism – barely any head movement in his delivery – give him a delivery capable of being repeated over lengthy starts; he just needs to add more of a distinct third pitch to the starter’s profile. Regardless, Van would be an exciting prospect for a talented pitching coach to work with.

Each time I saw Perez this summer, he hit. In our summer events, he hit .443, hardly ever struck out with triple the walks compared to punchouts, and also slugged .620 because of liners into the gaps. Yes, it’s more of a contact over impact hitting profile from the left side, but he timed velocity, recognized spin, and had a natural feel for covering the plate and getting the barrel to the baseball with an all-fields approach.

.@TheHAthletics 17u Gold’s Art Perez (@arthurperez29) smacks this ball into the LCF gap for a two-run double.

The two-way standout from Milby won’t grab recruiters’ attention physically, but he can really, really play the game, which also includes throwing a ton of strikes with multiple pitches on the mound.

Another two-sport athlete who catches passes Friday nights, Creel’s hitting ability from the left side has always stood out to me. He’s caught some in the past, but I think he’s a future outfielder who could cover some ground and also provide some punch in the batter’s box with a short, quick swing. Creel had an extremely productive junior season at Sachse, has been a performer in summers for the Dallas Tigers, runs well and puts together the types of at-bats that suggest his hitting will translate.

.@DTigerBaseball Hernandez 2023’s Jhett Creel (@CreelJhett) drives in a run in the top of the 4th with a double to right field.