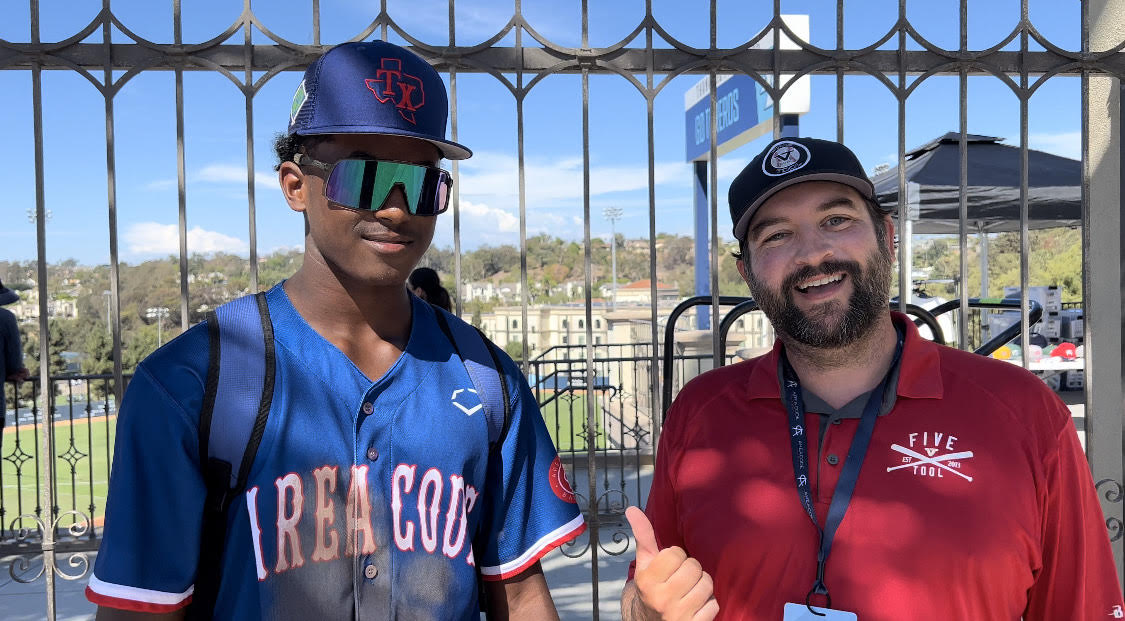 Soon, the 2023 Five Tool 55 will receive a much-needed update after the initial list was published over a year ago. All that’s left is sliding a few rows up or down on the Google sheet and finalizing what’s proven to be the most difficult part – the final 10 names on the list. Seemingly, each passing day provides a name that grabs our attention and makes us wonder, “can we squeeze him on the list?”

Of course, this is another reminder how deep and talented the state of Texas always is and how many excellent players are left off the list of 55. It’s also another reminder how much players can change over the course of a year and that players can still emerge as major prospects now and months from now. Before the updated list is unveiled, we wanted to preview some of the names who will make big jumps and more.

Without releasing the list, we can say for certain there are going to be several new names in the top 10. Hey, we have to build some suspense somehow! Although, I imagine many of y’all can fill in the rest of the names in the top 10. Anyway, Barrett Kent (Pottsboro), Aden Howard (Hebron), Ethan Mendoza (Southlake Carroll), Jack Bell (W.B. Ray), Zane Adams (Porter) and Nehomar Ochoa, Jr. (Galena Park) will be included in the updated top 10.

Hebron 2023 OF Aden Howard (@AHoward24_) continues his ascension in the prospect world w/ a 4 hit night for the @BlueJays Scout team. Was aggressive on the bases all night and tracked balls down at 3 OF spots. @FiveToolTexas @HebronBaseball @DallasTigers23 @DBU_Baseball commit pic.twitter.com/Qfe1W8KJhE

Howard is a good example of the challenges of ranking players before their junior season because we really didn’t know too much about him until Drew Bishop saw him at a Hebron preseason scrimmage. Credit Drew for a very bullish report because it became immediately obvious during Five Tool events this summer, at Area Code and then again at a recent Blue Jays Scout Team game that Howard, a switch-hitter, is one of the state’s best prospects.

Aden Howard (@AHoward24_) showed @ACBaseballGames why he’s been one of the state’s 📈 2023 ⭐️. Solid all-around performance with exciting tools and survived two encounters with the outfield wall 😂. @DBUPatriots commit and @HebronBaseball OF discussed that and more ⬇️. #ACGames22 pic.twitter.com/NQZQVMQ5kF

Howard’s combination of athleticism, speed and physical projection remain extremely exciting, but even more exciting is he’s emerged as one of the top hitters in the state. And he keeps getting better with the bat while his defensive skill progresses in the outfield.

Southlake’s Ethan Mendoza (@_EthanMendoza) picks up where he left off on a sizzling summer.

Just misses a second HR on the night in the first clip and hammers a HR into the bullpen in the second. 📈@FiveToolTexas @DragonBaseball @stixscout2023 @ASU_Baseball commit pic.twitter.com/laTXUJF0mD

Speaking of hitters, I think it’s time to anoint Ethan Mendoza as the best pure hitter in Texas. Sure, there are a handful of better overall prospects. But hitters? Show me a better one. The Southlake Carroll shortstop and Arizona State commitment was sensational for the 6A state champs, was even better during Five Tool events this summer, was amazing at the AABC Connie Mack World Series, stood out at Area Code and showed up to the first Blue Jays Scout Team game against Hill College and smashed a bomb while also just missing another off the wall.

I like the defensive actions and baseball mind on the dirt, too. Each year, the number of prep players who can consistently get on time against good velocity, consistently put the barrel on the baseball, and prove they can hit great stuff while limiting whiffs is a very, very low number. He’s one of those players.

Jack Bell (@jackbell2023) had a really good #MattinglyWS. I think he was even better @ACBaseballGames. Added strength is showing and barrel feel was impressive. Watching his mind work with his defensive skill is fun. @raytexanbsbl – 2023 SS@AggieBaseball commit@FiveToolSTX pic.twitter.com/dgmXYnzBdC

I’ve been a longtime fan of Jack Bell’s talent and skill, and after an extended look at Twelve Scout Day, the AABC Don Mattingly World Series, TSA Prospects All-Star Game and Area Code, I’m an even bigger fan. The strength Bell has added showed in the way the ball came off the bat and his feel for the barrel consistently stood out. The Texas A&M commitment is maybe my favorite infielder to watch play defense and his baseball clock always seems to be a couple of steps ahead of the action.

Physically, Bell looks like he has more growth on the horizon and he’ll definitely continue to add strength, especially through the upper half, while likely maintaining his athleticism and ability to stick at shortstop with enough arm to play the position.

Each time I saw Zane Adams, an Alabama commitment, he was up to 94 MPH with a curveball and changeup that both created whiffs. And each time I saw the lefty, his ankle still wasn’t quite back to 100%. He made a very, very strong case that he’s the top left-handed pitching prospect in the state. As for Nehomar Ochoa, Jr., I’ll keep it simple: he has future 60 raw power; he throws 94 MPH off the mound and is just scratching the surface of what he could become as a pitcher; he has a plus arm from the corner outfield; at 6-3, 215 pounds, he ran 4.3 seconds from home to first multiple times; from the right side, he consistently creates good barrel paths with his hands; and he’s basically a full year younger than the rest of the 2023 class.

Some of the new names, in addition to a couple above, who will make their debut: Gavyn Jones, Jackson Brasseaux, Garet Boehm, JJ Kennett, Diego Luzardo, Alex Petrovic, Easton Tumis, Aidan Coleman and Javier Torres. In the case of several of these guys, it was a matter of seeing them in person.

LHP Gavyn Jones (@GavynJones08) has been one of the summer’s big 📈. He was at his dominant best @ACBaseballGames with four pitches that got whiffs and pounded the zone.

Jones, a Texas Tech commitment from White Oak, was excellent during Five Tool events this summer and if not for Travis Sykora and Barrett Kent, he would have been the pitching name from the Rangers at Area Code. It took a few pitches at Twelve Scout Day to circle Brasseux as a no-doubt Five Tool 55 prospect and there is still a lot of development that could occur to take his pitching to the next level.

For the lead!@TwelveRecruits 2023 Maroon’s JJ Kennett (@JJKennett) caps off an incredible top of the 6th and goes back-to-back with a go-ahead home run to right center. #FiveToolPower

Boehm has some of the best right-handed raw power in the class and is one of my favorite hitters. Kennett is a winner, has improved as a hitter, should stick at catcher and is a future leader at DBU; he’s the type of player who can elevate a program. I got Kyle Hendricks vibes when watching Luzardo calmly and easily fill up the strike zone with command, and I shook my head while watching Reagan’s Aiden Coleman because it shouldn’t have taken me that long to finally see him (TSA Prospects All-Star Game).

Easton Tumis (@EastonTumis) had one of the best performances of the day @texas_scouts All-Star with a dominant showing thanks to excellent execution of a good slider.

What sold me the most on Petrovic? Watching how smoothly he moved at shortstop, especially for a player his size. That translates really well on the mound. As for Tumis, there’s a lot to like about a quick, loose arm that can touch 94 MPH with a fastball, snap off 85 MPH sliders that flash plus and also throw a changeup for a strike.

That’s not the entire list of new names because we haven’t completely finalized the list, which brings me to our next point…

THE DEPTH OF THIS CLASS IS STRONG

It’s also annoying. Of course, I mean that as affectionately as possible. Our list of possible additions is 20 deep with names and a good case could be made all of them deserve to be No. 55. When we label players as “just missed” prospects, it’s a literal definition; they have a very similar talent level and just missed. Similar to the MLB Draft, the difference in talent level decreases as the list progresses. Is there a big difference between the top five and No. 55? Yes. Is there a big difference between No. 40 and No. 55/just missed group? No.

While it’s annoying when cutting a list at 55, it’s also exciting because there are some newer names and other players rapidly improving who are poised for fantastic senior seasons. At this point last year, I barely knew who Jack Livingstone was. He ended up No. 16 on the final 2022 Five Tool 55. Texas Tech outfielder Jeric Curtis, who finished No. 4, followed a strong summer with a fall that solidified him as one of the premier prospects in the state. There is still so much baseball ahead and so much to learn about this class. That said, the updated Five Tool 55 will include at least 50 players we’ve already seen in person before their senior seasons begin, and in many cases we’ve seen the players multiple times.